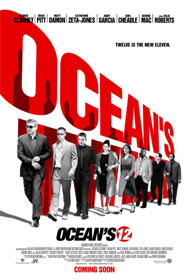 Twelve Is The New Eleven

After splitting the $160 million take, each of the infamous Ocean's crew have tried to go straight, lay low and live a legit life…but that's proven to be a challenge, much to the chagrin of Danny's wife Tess (Julia Roberts).

When someone breaks Rule Number One and rats them out to Benedict, going straight is no longer an option. He wants his $160 million back -with interest -or else.

And, as the gang quickly discovers, Benedict isn't the only powerful person in the world looking for Ocean's Eleven

My Verdict:
Ocean's Eleven was such a success that a sequel was inevitable and Ocean's Twelve is a great sequel. Danny Ocean and his gang are back together because Terry Benedict is looking for his money that was stolen by Ocean's eleven and one by one he tracks down the guys of Danny gang, asking for it in no uncertain terms and he wants it soon. This sets the scene for Ocean's eleven to re-group and try to devise a plan to return what amounts to an inconceivable amount of cash as most of them have used the proceeds of the previous heist. This means heading overseas to steal more loot - less chance of getting caught or so they think and so 'Ocean's Twelve' is set cosmopolitan Europe.

Maybe there has never been a movie made with such a large cast jostling for screen time, which is a negative aspect of this otherwise entertaining movie. There are so many characters that character development is put on the back-burner and some of the cast are in the 'don't blink or you'll miss them' category which is a shame considering some of the wasted talent. Added to the ensemble cast this time is Catherine Zeta-Jones as a Europol Chief, who somehow manages to shoe-horn herself into all her outfits, Vincent Cassel as the ultimate arrogant thief, a too brief turn from Robbie Coltrane, a words fail me piece from Bruce Willis and an unbilled Albert Finney. Add these to the already large cast and it's starting to get very cramped.

Returning from the original 'Ocean's Eleven', some of the characters have been allowed more screen time, including a very cheeky Matt Damon who managed to steal all his scenes, whilst some are given less screen time - Bernie Mac is one who we don't see much of.

Steven Soderbergh has directed 'Ocean's Twelve' as a slickly polished piece that seemed effortless with its quick action, twists and double dealings around every corner. Concentration is needed to keep up with the action, some of the sub-plots and conversations in the initial stages with things thankfully starting to slow down towards the conclusion. One of best aspects of 'Ocean's Twelve' is that the cast looked like they were having so much fun, which transfers through to audience taking us along for the ride. Who knows when we'll meet Ocean's gang again?