Beautiful, confident and intelligent 18-year old Kristen Stewart doesn't suffer fools gladly. One who refuses to play the game, she has always been drawn to smaller films that impassion her. Twilight, the hugely successful literary franchise, is a bigger movie for the actress, but playing the role of the isolated Bella who falls for a brooding vampire, was a role too irresistible. This confident and always outspoken actress talked to Paul Fischer in this exclusive interview.

QUESTION: This is an unusual thing for you to take on, because you have been doing - you tend to take a lot of small films. This was something that spoke to you because of the identification you had with this character, would you say?

KRISTEN STEWART: It wasn't so much the character. She's not a very distinct - there aren't many qualities about her that differ from mine. I mean, you really project yourself onto her when you read the book, because you experience the whole story through her eyes. I mean, you feel like you are her eyes. And I think what it was for me, was that I read a synopsis of the story before I read the script or the book, and it was something that everybody was freaking out over. Like, "Everybody wants this role. Kristen, you have to read this." And it was like, "Okay. Well, I don't want to be a part of something that presents a completely ideological idea of love to young girls, and puts their female heroine in a position"-and this was just the synopsis - "In a position that is just subject to, like, this man that is all-powerful and all-holy, smart, confident, and she's just happy with that." It was very shallow. It was really vain. When you try to sum up this movie in a couple sentences, it sounds trite and superficial. But then I read the script, and it was just the opposite of that. And the power balance between these two characters - I mean, apart from just wanting to portray such an epic love story, which I thought was ambitious - and such a dire love story. I like that idea. It was that she wears the pants in this relationship. I mean, you know, you have this guy who is 108 years old, and he hates himself. And he's afraid of himself. And he's afraid of her, and he's afraid of his whole situation. And he's just neurotic as all hell. And then you have this girl who doesn't know anything about - she's totally naïve to the entire situation. Yet she's willing to submerse herself wholeheartedly, because she trusts herself. And I think a lot of people are like, "Oh, see? Well, that's weak. That's a weak character." No! She wants it. It's something that she's willing to overcome. So - and my favorite thing about Bella is, she trusts herself. She puts a lot of stock in her feelings. I admire that.


QUESTION: What are the pitfalls to taking on something that has such high expectations from a core audience, do you think? 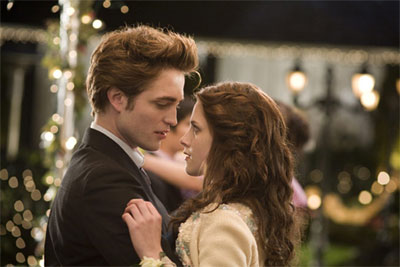 KRISTEN STEWART: Questions like this, you know? Having to answer that question over and over and over. And it's not just the redundancy of it that bothers me. It's just like - I never have an answer. And so I feel like I'm scrambling to just think of some arbitrary answer, and you don't have one. I have a responsibility to this character and the story first and foremost. And a responsibility to myself. When I made the movie, I had no idea about all these fans' expectations. And then all of a sudden they were shoved on me. Like, toward the end of filming I realized, "Wow. This is really"-I mean, you can go on-line and read all of it. But there's something - I never believe blogs. They might as well be the same person writing over and over. You don't know, really, how many people - but I care about the book just as much as they do.


QUESTION: You've signed on for all three, right?

KRISTEN STEWART: Uh-huh (AFFIRM). If they make them, absolutely.


QUESTION: When I first met you, you were fairly book-immersed. In fact, I remember you were reading - I think it was Moby Dick or something at the time. Some mammoth novel. Are you still as voracious a reader as you were?

KRISTEN STEWART: More so. I read more than I used to. Yeah.


QUESTION: And do you try to continue your education as much as possible outside of your formal schooling?

KRISTEN STEWART: Happened? What happened? Well, I had classes, independent study, that were college prep classes. They were getting - they were putting me in the right position to have all my options open. Literally, of any school I wanted to go to. And I found myself feeling guilty every time I picked up a book that wasn't for school. Or, like, I couldn't ever sit down and write anything, because it was like - "You should be doing school." I had such an enormous workload, that I hated it. And it didn't make me happy. I found myself so stressed out, and just unhappy. And not really - I mean, I really loved home school. I really got a lot from it. But I got a lot from it once I dropped the structured courses. And I haven't talked to you since I did that. And I took up a very subjective course outline, or whatever. And I get to sort of choose what I do. And I don't need the piece of paper - I don't need the satisfaction of saying to people in interviews that I went to some snooty school. And, I mean, I have a future in academics. It's just not a conventional one.


QUESTION: What do you want to do, academically? I mean, what is your ambition, academically, if you have any? 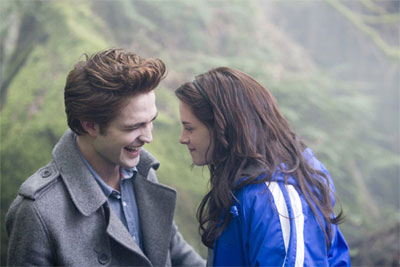 KRISTEN STEWART: Not to accomplish anything. Like, not to produce anything, necessarily. But just to - every time I leave the country, I feel like an absolutely - just an ignoramus. But I don't know a whole lot and I would really like more knowledge. But. What is in my future academically? I might work up the nerve to go back to school. But I don't think I will - I mean, I don't know. I'm a bit of an - I guess autodidact's the word. I can sit in on classes. I just never want to be enrolled in a school. I can go crash courses.


QUESTION: You're a very unconventional person. I guess you always had that about you. The scribbling poetry, which I had a glimpse of when I first met you, is that a remaining closeted ideal? Or do you think you will develop skills as a writer, do you want to work on your writing?

KRISTEN STEWART: I do want to work on writing, because - like, when I feel like acting is just living - I mean, really, nobody else can be a human better than anybody else. It's really an entirely subjective, rooted in emotion, just feeling spontaneous, impulsive thing. Writing's a skill. Writing is something that you can train yourself to know better. To know yourself better. And it's intimidating as hell. I mean, I definitely will always do what I've been doing. I've also started taking a lot of pictures, and they help the writing. The pictures help the writing. I mean, I want to make books. I want to take pictures and then write all over the pictures. And then I don't have to say a complete story, because I have the picture, and I have just a word. 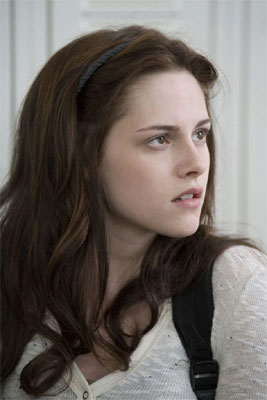 
QUESTION: What are you doing next professionally?

>KRISTEN STEWART: I go back to New Orleans on Monday to do two more days of work on a movie called Welcome to the Rileys, with James Gandolfini and Melissa Leo from Frozen River and she's really amazing. Breathtaking. I play a runaway street kid. A child. A broken little kid. Like, just a broken toy. And James Gandolfini comes and sort of tries to pick up the pieces, and realizes that she needs to do it herself. And shows her that she has the capacity to be more than just this sort of little icebox that she's turned into. I mean, she's the sweetest kid ever. But the kids that have been abused in the way that she has, and that have lived on their own for so long - they don't think that they can be a normal person again. They just are, like, above it now. It's like, "Oh, I can't go back there." But they can. And she sort of reawakens him. He's in a real rut. And he's getting over the loss of his daughter. He's grieving, and he's been grieving for eight years. And his wife is entirely agoraphobic and crazy. And she - it's like, the dynamic - have you seen The Jungle Book? It's like Mowgli and Baloo. It's like, this big, heavy, weighted-down man, and this light little thing just buzzing around him. And gets - in the movie, I feel like whenever we're in a scene together, I could give him a piggyback ride. He just really lightens up.

KRISTEN STEWART: Hopefully a movie called K11. Not hopefully, actually. We're supposed to go in January. My mom's directing this movie that she wrote.

The much anticipated film version of the best selling novel Twilight will release in Australia on 11 December. This action-packed modern day love story between a vampire and a human is based on the current New York Times and international bestselling series.

When Bella Swan (Kirsten Stewart) moves to the rainy town of Forks, Washington, she doesnt expect much in her life to change. Thats until she meets the mysterious and dazzlingly beautiful Edward Cullen (Robert Pattinson), a boy unlike any she has ever met.

Twilight is a cultural phenomenon, the books have been translated into more than 20 languages and a dedicated fan base eagerly awaits the movie release.


Taylor Lautner Inside Out the New Moon star
www.girl.com.au/lautner-inside-out-new-moon.htm