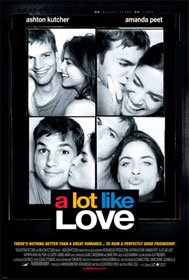 There's Nothing Better Than A Great Romance... To Ruin A Perfectly Good Friendship.

Synopsis:
A romantic comedy about romantic obstacles, 'A Lot Like Love' takes a fresh, sophisticated and entirely modern look at falling in love. Ashton Kutcher and Amanda Peet star as a pair of dynamic, diametrically opposed twentysomethings -- Oliver and Emily --whose initial fateful meeting sets off sparks . . . then seems to go nowhere. Over the next seven years, they will continue to meet. But is their relationship simply a good friendship? Is it destined to be yet another romantic disaster? Or is what they have between them something a lot like love?

My Verdict:
Told in reverse chronological order, 'A Lot Like Love' is essentially a love story about Emily (Amanda Peet) and Oliver (Ashton Kutcher). The couple meet at an airport seven years ago and on the same flight to New York, impulsively join the mile high club, but leave the spontaneous relationship as a simple chance meeting, both aware that there is something about each other that just clicks. They later bump into each other, have a few too many drinks in a bar where Oliver gives Emily his phone number and tells her to call him in six years when he's rich and famous. It only takes Emily three years to call Oliver after the breakdown of a relationship with another man, and they re-ignite their spark. This on again, off again relationship continues over the years, each calling on the other when hit with an emotional crisis, culminating with the present and the complication of a wedding.

'A Lot Like Love' works really well because of Ashton Kutcher and Amanda Peet. They have great chemistry and a wonderful ability to both maintain a freshness to their roles right throughout. Their characters both develop over time as they search for that elusive partner, not seeing the forest for the trees when their perfect match is right in front of them. Even though it is obvious that Emily and Oliver will realise the depth and strength of their relationship, their journey still has enough unpredictability in it to make it believable and make you want to share in it.

Ashton Kutcher has one of the most gorgeous cheeky smiles going, giving Oliver a cute naivety yet belying that underneath he has a deeper understanding of people possibly due to the fact that his brother (in the movie) is deaf and so he knows how to communicate on a different level due to this experience. This gives his character just that bit more thoughtfulness when interacting with others, especially Emily, and is highlighted in a restaurant scene when both characters decide not to speak to each other with Oliver eventually telling Emily that he is used to going for days without speaking as he grew up with his deaf brother.

Amanda Peet is so energetic and alive as Emily, starting off as a bit of a rebel and developing over the years into a person who is starting to find herself. Her onscreen relationship with Oliver is so warm and natural and never loses its appeal and neither does her character ever lose her charm.

Backed by a great soundtrack, 'A Lot Like Love' is an upbeat, entertaining and satisfying movie about falling in and out of love, about relationships where the unspoken is often more relevant than the verbalised and ultimately about being true to yourself. It's a lot like life.