The fun filled sequel to the 1967 Disney masterpiece.THE JUNGLE BOOK 2 begins shortly after the original film ended with Mowgli torn between two worlds.

The man-cub now lives in the village among humans, learning about the love of a family for the first time in his life.

His new life includes his little stepbrother Ranjan, and his best friend Shanti, the girl that initially wooed him from the jungle. But living in the village means following human rules, a new concept that encroaches on the freedoms he enjoyed during his upbringing in the jungle.

Moreover, Mowgli's still got that jungle rhythm in his heart. He misses his old buddy Baloo the bear, who likewise pines for his little man-cub pal. Despite being warned by the villagers about the dangers of the jungle, Mowgli sneaks away to be with Baloo. Unbeknownst to Mowgli, he is followed by Shanti and stepbrother Ranjan.

Baloo does his best to convince Mowgli that his proper place is with him in the jungle by launching into the show-stopping music al number W-I-L-D. But the fun cant last the hypnotic snake Kaa is seeking a snack and the villainous Shere Khan has his mind set on vengeance.

In continuing the adventure from the first film, the director Steve Trenbirth knew that several important themes from the original JUNGLE BOOK would need to be continued. In particular, the engaging, tactile relationship between Baloo and Mowgli and the memorable jazz based music were recreated and emphasised.

The creators of the sequel were also conscious to allow the audience to get re-aquatinted with the original beloved characters and insidious villains and most importantly, to capture the original films inherent sense of fun.

The original film left the door wide open to explore the future of these wonderful characters”, says producer Mary Thorne. “It naturally led us to a coming-of-age story for Mowgli. He faces the universal questions everyone encounters at some point in their lives that juncture between our past and our future”.

The film-makers were also conscious to maintain the fantastic, up-beat musical elements present throughout the original film. Composer, Noel McNeely, provided an involving score with Dixieland and New Orleans Jazz, big band and occasional boogie-woogie influences to establish the films beat. The entire jazz tone is designed to move the audience, connect then to the story and get them bouncing along in their seats.

Along with the new show-stopping songs, the creators also wanted to revisit the immensely popular song Bare Necessities” from the original film. They recognised that it was an essential piece of music that bridged the two films and rekindled all the fun and warmth of the Mowgli / Baloo relationship.

The result is a fabulously joyful sequel to THE JUNGLE BOOK which embarks on an exciting new story-line but retains the loveable characters and heart-warming relationships that audiences loved the first time round. 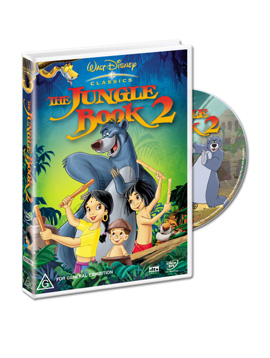 Enchanting, fall in love again with the sweetest of honey bears, Baloo and his best friend Mowgli. And discover why you can take the boy out of the jungle but you cant take the jungle out of the boy. That old familiar beat gets under your skin.

Available at your usual stockists.