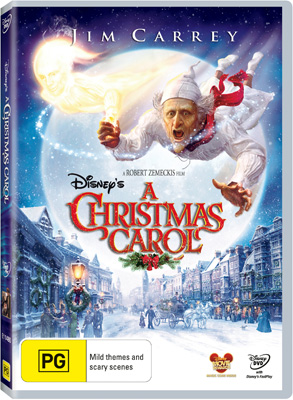 Question: Can you discuss the characters you play?

Jim Carrey: Scrooge was abandoned as a child and I always think that the only thing we have to beware of in this world is the unloved. And that's where it all comes from, that is where Scrooge came from. He tried desperately to cling to whatever was good in life, the things he cared about, and his sister. But he slowly became disappointed by life. There is a transition in the film, at the point where we have the break up scene between Scrooge and Belle (Robin Wright) where he has become a different person. As a child, as children do, Scrooge tried to think positively about the situations he found himself in, children always try to make the best of things. But by the time he was 35, he'd had enough and was just about done, he was finished with making the best of it. And that void within him cannot be filled any more unless he really goes inside himself, which is what happens in his journey. The ghosts that he encounters present his opportunity to see himself. He is introduced to himself. I think that everybody would have the kind of cathartic experience Scrooge has, if they were given the facts about their lives, if they could see the whole picture.

Robin Wright: I play Scrooge's younger sister Fan, who's nine and very English. That was so much fun. Then I also play Belle who is Scrooge's first love and then becomes his wife. But she leaves because of the way he is, she can't take it anymore when he becomes too bitter. She tells him that he has removed himself to the point at which she cannot be with him anymore. She tells him that he has excluded everything and everybody from his life that loves him.

Colin Firth: This is one of the first times in my life I have played a character who is so cheerful. He (Fred) is definitely earnest and headstrong; he will not let Scrooge spoil Christmas for him, but he is happy. I have never played anyone who is so completely without a dark and melancholy streak.


Question: Can you tell us about working with Bob Zemeckis?

Jim Carrey: It's so important for me to trust my captain, (Zemeckis) and to have that faith in him and to love his work (which I do). But acting is always uncomfortable, so when acting I am always in a state of discomfort, I am never satisfied. The thing that saves you in the worst moments doing a film like this is having that faith and trust that it's going to look beautiful and work out.

Colin Firth: He's one of our great directors. Working with a director like him, you realise very quickly why these filmmakers have such a great reputation. I would never be able to understand this technology in a lifetime. But he does it with such ease and enjoyment. He loves it.

Robin Wright: He's a visionary in this kind of filmmaking. This genre is his forte, this 3D motion capture film technology; he created it and made it flourish. It is incredible to watch what you can do on a computer, with the performance of actors. It is amazing how he put it all together, you know, he's great. I've known him almost twenty years so he is like an old friend. He says, 'hey, do you want to come and play with me?' I say, 'yes, let's go play.' It's great!


Question: What were the challenges for you in terms of the technology?

Robin Wright: It's great, it's like doing theatre. You feel like you're on a stage, moving around wherever you want to go. You're not locked into a particular position, and you can do different things each time. You're not hindered; you're just in a wet suit with weird balls all over it!

Jim Carrey: This is just part of the future and I believe that there will be movies made soon, that you can actually inhabit, you will be able to be in the movie. You will be able to walk around the movie, we'll have 'movies in the round' - it's exciting. It is all about different ways to tell stories.

Colin Firth: The main differences from traditional filmmaking are in the preparation, which is quite extraordinary. They flew me to London and I had to stand in my underwear as they scanned me. You are basically a 'virtual puppet', they want to get all the data on the actor, so that when you finally do your acting, everything is in the data base, and they can capture every expression, right down to the last crease in your face. So you go through a lot of different body poses and movements and then they go through every conceivable facial expression. They also take a face cast, they submerge you in the stuff that dentists use to take gum impressions, it is a bit intense, you have two little holes to breathe through. And then you come to America and they cover you in dots and put you in an extraordinary outfit with a kind of helmet, with a little camera pointing at you. I don't really grasp this technology. You know, my 8-year-old can explain it better than I can. But having said all that, after all the preparation, you are free.


Question: Can you sum up the appeal of the film?

Jim Carrey: I think this is a beautiful holiday film, you get everything in it, you get the 'frights', the catharsis and it is a beautiful story of redemption. It's great.

Robin Wright: Well I think this advanced technology that you're going to see in the movie, is unlike anything you've ever seen in the 3D forum. Bob Zemeckis really is an originator and I don't think we've ever seen anything like it.


A Christmas Carol is available on Disney Blu-ray Value pack and DVD, 24 November 2010!