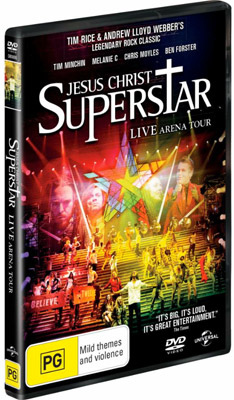 Jesus Christ Superstar follows the last seven days of Christ leading up to his crucifixion as seen through the eyes of -Judas Iscariot', and features hit songs such as -Superstar', -I Don't Know How To Love Him', -Heaven On Their Minds' and -Hosanna'.

An award-winning creative team has transformed this legendary rock musical into a unique, contemporary, state-of-the‐art spectacular. Director Laurence Connor, known for his work on the 25th anniversary performances and concerts for Les Misérables and The Phantom of the Opera, worked alongside Mark Fisher, the acclaimed world-leading set designer responsible for the staging of the Diamond Jubilee music concert in front of Buckingham Palace, and Patrick Woodroffe who worked on the Opening Ceremony of the London 2012 Olympic Games, to create a conceptual masterpiece.

Jesus Christ Superstar is a worldwide phenomenon with over 40 different cast recordings released in 19 different languages. Add this iconic musical to your collection


Special Features:
An Introduction By Andrew Lloyd Webber Behind The Scenes