It certainly has been another stellar year for Jessica Mauboy. The past 12 months have seen the singer/ songwriter release her 3rd studio album Beautiful, represent Australia at Eurovision 2014 and perform at the official Flag Handover Ceremony at the Glasgow Commenwealth Games. Now Jessica is set to release a brand new single, Can I Get A Moment? which is available to preorder.

Can I Get A Moment? is a fresh and infectious up tempo track written and produced by legendary songwriter and producer Kenny -Babyface' Edmonds who has been behind the break out of success of Ariana Grande and Justin Bieber along with working on albums for the likes of Beyonce, Alicia Keys and Mariah Carey.

With 14 x top 30 hit singles to date, Jessica features firmly amongst some of the most successful Australian female artists of all time. We asked Jessica Mauboy what it meant to her to be Australian and what she defined the Australian spirit to be... Jessica Mauboy has revealed her third studio album; Beautiful, will be released on Friday October 4. The album... This is Jessicas' highest debut to date and comes on the back of 14 x consecutive, Gold, Platinum or multi... Gotcha is the first single off The Sapphires Soundtrack starring Jessica Mauboy, Deborah Mailman and Chris... Nine Live and Sony Music Entertainment Australia are excited to announce that Nathaniel will be a special guest... 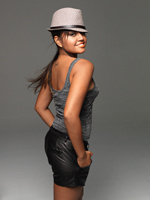 Chris Brown will tour Australia in April and May of 2011 with special guests such as Australia's own queen of...

Sim'sation Jessica Mauboy in The Sims 3

Australian pop sensation, Jessica Mauboy is embarking on an entirely new adventure into the virtual world of The...

Following her debut at the Cannes film festival to promote her new film, The Sapphires, Australia's favourite...

This is Jessicas' highest debut to date and comes on the back of 14 x consecutive, Gold, Platinum or multi...

Jessica Mauboy has just made Eurovision history by performing during the second semi final in Cophenhagen tonight.

Jessica Mauboy I Believe - Anything Is Possible

I Believe - Anything Is Possible is a reworking of a song that features on Jessica's current album Beautiful.