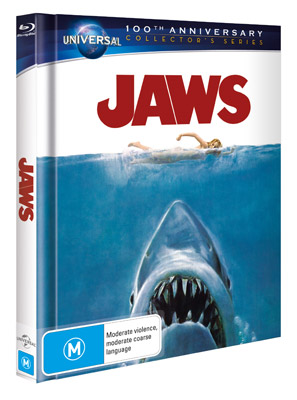 When the seaside community of Amity finds itself under attack by a dangerous great white shark, the town's chief of police (Roy Scheider), a young marine biologist (Richard Dreyfuss) and a grizzled shark hunter (Robert Shaw) embark on a desperate quest to destroy the beast before it strikes again. Featuring an unforgettable score that evokes pure terror, Jaws remains one of the most influential and gripping adventures in motion picture history.

Special Features:
* The Shark is Still Working: The Impact & Legacy of Jaws: A feature-length documentary featuring never-before-seen footage and interviews with cast and crew including Steven Spielberg, Richard Dreyfuss and Roy Scheider
* Jaws: The Restoration: An all---new, in---depth look at the intricate process of restoring the movie
* The Making of Jaws: A two-hour documentary featuring interviews with key cast and crew
* From the Set: An insider's look at life on the set of Jaws, featuring an interview with Steven Spielberg
* Deleted Scenes and Outtakes
* Jaws Archives: Take a peek inside the Jaws archives, including storyboards, production photos and marketing materials, as well as a special segment on the * Jaws phenomenon
* Original Theatrical Trailer
* Digital Copy: Viewers can redeem a digital version of the full-length movie from a choice of retail partners to watch on an array of electronic and portable device