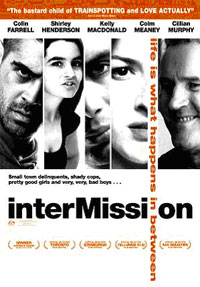 Life Is What Happens In Between

Synopsis:
'Intermission' is an urban love story about people adrift and their convoluted journeys in the search for some kind of love. A misguided break-up between two young lovers initiates a series of events affecting everyone around then with cataclysmic results.

All the characters are blissfully unaware of the accidental nature of life and the way in which their lives intersect, careening from the hilariously funny to the heart-breakingly sad. The hapless lover and his best mate, the sex-starved singleton; the maverick detective and a ruthless petty thief; the pretty girl on the rebound with the older married man; the deserted wife on the brink of breakdown; the ambitious TV producer; the robber and abandoned fiancé and a nine year old tearaway all find their lives interweaving in this hilarious story of modern romance with a bitter twist.

My Verdict:
'Intermission' opens with a shocking incident that comes as an utter surprise. From there, more surprises follow throughout the movie. This is a movie that sometimes felt more like a tv show by not being powerful enough to justify a movie version. However, it was still worthy despite this hiccup and also if you can get past the Irish accents of the cast which required a deal of concentration at times. It is an Irish movie set in Dublin about what happens in between a relationship breakdown, hence the title. It has a series of unique characters that each have their own foibles and are all trying to overcome some obstacle in their lives. One of the most fun is that played by Shirley Henderson, who has left a disastrous relationship that continues to haunt her and includes an infamous moustache that she has allowed to grow on her. Some of the best moments are about her moustache. Colin Farrell is a very violent, disturbed man, bent on self-destruction but with a difficult accent to appreciate. He also sings the song that concludes the movie and covers the credits.

'Intermission' is a raw, gritty movie that is not pleasant but is probably realistic in every sense and includes some very black comedic moments. Relationships do break down and people suffer because of this yet life goes on. It is a fast paced movie that is relentless with its undercurrent of violence and may not be a movie for everyone even with its well-rounded conclusion where many of the situations are resolved. At the very least it is original which is a relief.