In My Father's Den 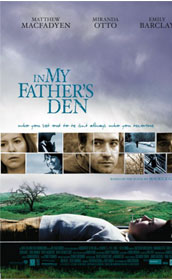 Who You Set Out To Be Isn't Always Who You Become

Synopsis:
Paul (Matthew Macfadyen), a battle weary war photographer, returns to his remote New Zealand hometown when his father dies, and faces the past he left behind. To his surprise, he also finds the sixteen-year-old Celia (Emily Barclay), the daughter of his first girlfriend, who hungers for the world beyond her small-town.

But many, including the members of both their families, frown upon the friendship and when Celia goes missing, Paul becomes increasingly persecuted as the prime suspect in her disappearance. As the violent and urgent truth gradually emerges, Paul is forced to confront the family tragedy and betrayal he ran from as a youth, and to face the grievous consequences of silence and secrecy that has surrounded his entire adult life.

My Verdict:
Teenagers or those in their early twenties have often left home on impulse, vowing never to return. Paul Prior, in this story, leaves home in his late teens, with his older brother running after him, crying and begging him not to go. Paul eventually returns after the death of his father, some seventeen years later, not knowing what to expect or if he will even be welcome. The small, rural town he left is like most of its kin in that they harbour secrets, and they are also fiercely loyal to those born and bred there. Paul barely makes it as a local but is given a second chance by most. As Paul is encouraged to stay longer by his brother, Andrew (Colin Moy), than his planned short visit, some of his past slowly unravels as the memories emerge, some pleasant, others painful. Paul is torn about whether he should stay but he finds an ally or sees his former self in Celia, the daughter of his first girlfriend. They form an unusual friendship, which is frowned upon by some, yet Paul finds himself drawn to Celia as he realises her intelligence and strength, and the even more scary possibility that she may be his daughter. When Celia disappears, this changes the dynamics of so many of the relationships in the town, which is so fascinating to watch.

Paul's relationship with so many of the townsfolk has changed since he left and upon his return, they are all caught trying to make sense of the past and its bearing on the present. Paul ultimately has to deal with the heartbreak of his youth as he finally faces the demons that he kept hidden away for so long. Matthew Macfadyen plays Paul Prior with the mature knowledge that a war photographer might have, yet giving him such an inner anguish that is barely containable, that he is almost bursting. Emily Barclay is enchanting as Celia, showing off maturity beyond her years, and a yearning for what lies beyond her tiny town. The rest of the cast are more than adequate, each bringing a special quality that makes them memorable without becoming overbearing, Andrew's godliness, Andrew's wife, Penny's, remoteness, their son Jonathon's distance.

'In My Father's Den' is set in the striking setting of rural New Zealand, Paul even remarking to Celia one day as they take in a view, "I need a smoke to deal with this scenery", as he races off to the car to retrieve a cigarette, his favourite nerve settler. The main setting is the childhood home of Paul and Andrew, which nestles in an orchard, beyond which is the equipment shed that further hides the den from the title.

This is a story about broken relationships, the attempts to repair them and the connection between different generations. It is a thoroughly captivating movie to watch, played almost low-key, yet revealing itself to be so, so first-class.