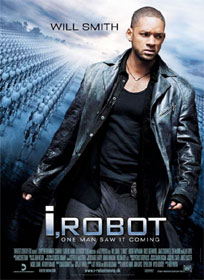 One Man Saw It Coming

Synopsis:
Will Smith stars in this action thriller inspired by the classic short story collection by Isaac Asimov, and brought to the big screen by dynamic and visionary director Alex Proyas ('Dark City' 'The Crow'). In the year 2035, robots are an everyday household item, and everyone trusts them, except one, slightly paranoid detective (Smith) investigating what he alone believes is a crime perpetrated by a robot. The case leads him to discover a far more frightening threat to the human race. 'I, Robot' uses a spectacular, state-of-the-art visual effects technique to bring a world of robots to life.

My Verdict:
The end credits of 'I, Robot' tell us that this movie is "suggested by" the short stories of Isaac Asimov. Therefore, it is not meant to be a literal interpretation of the stories, but rather an adaptation and extension of the stories. There were 9 stories in Asimov's collection of 'I, Robot' and this film could be considered to be the 10th, so for all die-hard Asimov fans, there is no need to feel that his work has been sacrificed, but rather extended. Some of the characters from the stories remain as does the three laws of robotics:
1. A robot may not injure a human being or, through inaction, allow a human being to come to harm.
2. A robot must obey orders given it by human beings except where such orders would conflict with the First Law.
3. A robot must protect its own existence as long as such protection does not conflict with the First or Second Law.

Will Smith has already had a dynamic career, and 'I, Robot' is going to be another feather in his cap. He plays Detective Del Spooner, a suspicious man with a secret who dominates the screen time, to be shared with by the robots and more specifically a robot called Sonny (Alan Tudyk). Dr Alfred Lanning (James Cromwell) sends a holographic message to Spooner upon his death, asking him to investigate his death. This is Chicago, 2035, and not everything is as it seems. Dr Lanning mentions something about a ghost in the machine, curiosity gets Spooner thinking, but his boss, Lt. John Bergin (Chi McBride) hampers him, telling him that Lanning's death was a suicide and to drop the case. No prizes for guessing he doesn't and it only spurs him on to investigate even more. He probes the company where Lanning worked, U.S.Robotics, and where the robots are made, which is headed by Lawrence Robertson (Bruce Greenwood) and enter the female lead, Dr Susan Calvin (Bridget Moynahan) as a robot psychologist.

'I, Robot' is a visual feast of computer-generated images - the robots are superb, especially Sonny, the city of Chicago is transformed, and many everyday items are computer operated. Colours from the cool spectrum, which serve to convey the futuristic aspects, dominate the film. There are some great action sequences, especially the car chase on the subway, where Spooner is told by a robot "you are experiencing a car accident". The story does have a climax that may be predictable but hey, that's Hollywood. 'I, Robot' is a breath of fresh air, especially when the science fiction genre has been in a drought, and provides some serious food for thought regarding the use of robotics and their involvement in our lives - something Asimov took very seriously. 'I, Robot' is a very entertaining way to spend a couple of hours and may even be worth more than one viewing.