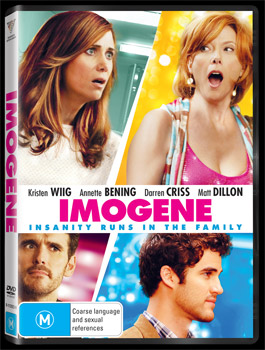 Kristen Wiig (Bridesmaids) stars as Imogene, once a promising young New York playwright whose promise has fizzled, thanks to a crisis of confidence. Heavily in denial about being dumped by her society boyfriend, Imogene uses her skill for drama to stage an elaborate fake suicide as an appeal for his sympathy. But her attempt backfires when she's put into the custody of Zelda, her estranged gambling addict mother, and must return home with her to the Jersey shore. Desperate to get back to her Manhattan circle of so-called friends, Imogene must finally deal with her family, including her unique brother Ralph, Zelda's new boyfriend The Bousche, plus a cute young lodger, who together help Imogene sort out her place in the world.