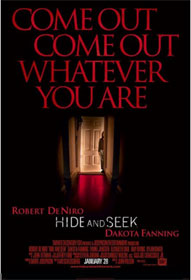 Come Out Come Out Whatever You Are

Synopsis:
'Hide and Seek' revolves around a widower, David Callaway (Robert DeNiro) and his daughter, Emily (Dakota Fanning). They move upstate to try and overcome the suicide of David's wife and Emily's mother, Alison (Amy Irving) but Emily soon creates an imaginary friend named Charlie who is not your average playmate and may be responsible for some very weird events that begin to take place in the Callaway's new home.

David Callaway (a tired looking Robert DeNiro) is a psychologist, who discovers his wife has suicided in the bath in the middle of the night, which their only child, Emily, also sees from the bathroom door. After this event, Emily struggles to come to grips with her mother's death, and with the added suggestion by friend and fellow psychologist, Katherine (Famke Janssen), they move upstate to allow Emily to settle. They choose an overly large house (why?), which is nestled in a forest with some strange neighbours, which signals for a very typical horror movie set-up.

After arrival at their new house, Emily decides to invent an invisible friend named Charlie. This concerns her father as he thinks she is regressing further into herself. A local woman, Elizabeth (Elisabeth Shue) and her niece, come by for a visit, and this really riles Charlie who seems to be agitated and indicates this by a message written with blood on the bathroom wall - pretty standard horror fare. The Callaways experience some more strange events, eventually leading into a pretty lame twist for a conclusion.

'Hide and Seek' is a very by-the-numbers horror thriller where director, John Polson, relies on traditional horror effects such as creaking doors in the night, spooky neighbours, and unexplained displacement of objects. It's a pity Robert DeNiro chose to do this film as he's wasted here and he really only looks semi interested in his role. Dakota Fanning is often better than DeNiro here, especially with her normally blonde hair a dark brown, which contrasts against her pale complexion and with her big eyes really makes her look kind of spooky. But, nothing can really save 'Hide and Seek' from being a very tame, run-of-the-mill, wannbe thriller that never really cracks that good scare that audiences of this genre are seeking.