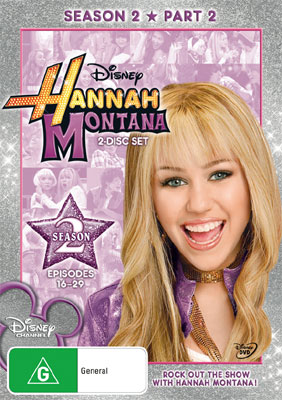 Laugh out loud and make some noise with Miley and her friends in 14 totally awesome new episodes in Hannah Montana Season 2 - Part 2, avaibale to own as a double-disc release from Disney DVD on 3rd June 2009!

When her life as the chart-topping celebrity Hannah Montana gets even more challenging, Miley Stewart (Miley Cyrus) relies on her family and friends to remind her to be true to herself.

In the second half of season 2, Miley gets a touch of envy when the Jonas Brothers hang out with her dad (Billy-Ray Cyrus)- and she goes to great lengths to crash their jam session. Miley's love-life also gets interesting when her old crush, Jake Ryan (Cody Linley), kisses someone else and she finds herself fat the centre of a very strange love-triangle when two boys vie for a date with her on the same night!

Throughout the following episodes, Miley gets herself into one disaster after another as she forgets her dads 40th birthday, fights with her best friend, Lilly over an unsuccessful date between her dad and Lilly's mum (Heather Locklear) and endures more than one uncomfortable visit from crazy relatives including the hilarious Dolly Parton as Aunt Dolly.

All the while, all the dramas and mishaps of life as a regular teenage girl are made twice as hard as Miley continues to keep her alter-ego identity of Hannah Montata a secret.

Hannah Montana Season 2- Part 2 is a must-own addition to any Hannah collection.

Special Features: Featuring a collection of Hannah Montana his performed throughout the series, including fan favourites Life's What You Make It, Rock Star and Nobody's Perfect and fun bonus features including episode highlights and Miley's Makeover special.