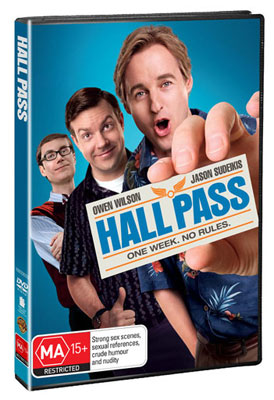 Best buddies Rick and Fred (Owen Wilson and Jason Sudeikis) have both been married for a long time. They love their wives, but, like some guys, just can't help checking out every other woman who crosses their paths.

Fed up with this habitual rubber-necking, their wives (Jenna Fischer and Christina Applegate) take a bold approach to revitalise their marriages by granting their husbands a "hall pass": one week of freedom to do whatever they want, no questions asked. Seven days to see exactly what it is out there they think they're missing... or stop looking once and for all.

At first, it sounds like a dream come true for Rick and Fred. But they quickly discover that their expectations of the single life-and themselves-are completely and hilariously out of sync with reality.