Maverick and original British director Guy Ritchie has made films that've always defined him as a director who works outside the box. So it was something of a surprise when he agreed to take on Sherlock Holmes, an iconic cinematic character for over five decades. Ambitious and tonally distinct from many of the director's previous works, this Holmes casts Robert Downey Jnr as he has never been portrayed before. Jude Law stars as Holmes' trusted colleague, Watson, a doctor and war veteran who is a formidable ally for Sherlock Holmes. Rachel McAdams stars as Irene Adler, the only woman ever to have bested Holmes and who has maintained a tempestuous relationship with the detective. Mark Strong stars as their mysterious new adversary, Blackwood. Yet as the director explained to Paul Fischer in this exclusive interview, Ritchie's take on Holmes is still consistent with his frequent exploration of London's dark side.


QUESTION: I guess one could say this is probably the most commercial film that we've seen from you in quite some time, so what was it about reinventing this character that appealed to you?

GUY RITCHIE: Probably because I was invested. I knew the stories very well, so I was familiar with it. But also, I suppose it kills me - as soon as someone said to me, "Look, how would you fancy rebooting this conception?" that - it tickled me, because I thought I could do something with it. And I'm not sure why I did it. I just thought, you know, "Oh, I think I could do a take on that." So that was really my starting point. I just felt as though I could do something with it.


QUESTION: Now, there's obviously a fine line between doing a period film, and giving it a contemporary twist. How were you able to convey that, during the early process of the development of the script? 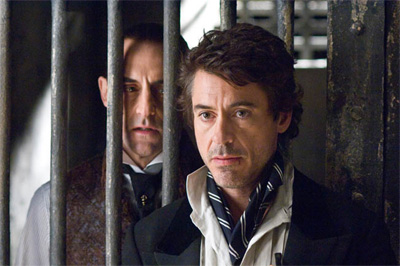 GUY RITCHIE: I think that's part of our unconscious, organic thing that takes place. First it's the head, and then you have to get rid of that and you have to get rid of over-thinking everything and then it becomes about a feeling. Does that feel right? I mean I'm a contemporary filmmaker, so I think the experience of what it is I've done in the last 15 years leads up to whether - you think you can do a take on it. And obviously, that experience then obviously informs the take that you have.


QUESTION: How much of Doyle was a template for you, in working on this?


QUESTION: In fact, you went out of your way to create - even though the character's intellect is obviously a hugely important part of this you make him a much more physical character than he has been depicted in the past. Was that your intent, or was it based on your conversations with Robert, once you cast Robert in the role?

GUY RITCHIE: No, I was always aware that if I was going into this, I was gonna make sure that he had a bit of this and a bit of that, and was accessible to a broad audience. And inevitably, that leads to a certain degree of physicality. But the root of that is inspired by Conan Doyle, who created essentially the first Western martial artist. So, you know, Conan Doyle was big on the idea that Holmes could defend himself, through skills acquired so, the source that influenced me was very Doyle-esque. 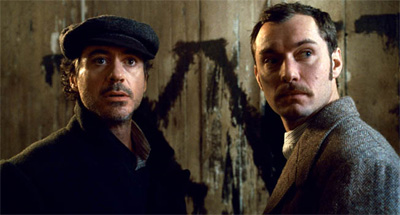 QUESTION: Much has been said, of course, about the really interesting way you defined the relationship between Holmes and Watson. Is this a love story, in a way, between those two characters? Do you see it that way?

GUY RITCHIE: I do, in a non-homosexual way. I mean, one's yin, one's yang, and they work much better together than they do as individuals. The sum of their parts adds to more as a whole. So, it just seems like an injustice on both of their parts if the other half is taken away. To a degree, the narrative is hinged upon that premise.


QUESTION: When you were writing the script, obviously you didn't base it on any existing Doyle story. I mean, was it very difficult to create a scenario that was as Doyle-esque as it seems to me to be?

GUY RITCHIE: Well, I think Lionel Wigram, who pioneered the vanguard on this project, was more of a Sherlock Holmes fan than really, anyone and he's a complete nut for it. So it was led by his enthusiasm to remain true to the narrative of Sherlock Holmes, that it was essential that we would remain loyal toward Doyle's vision, if you will.


QUESTION: Now, as a filmmaker, you've always been in the past - a lot of the time, anyway, drawn to the kind of underbelly of contemporary London. And this is obviously a very different visual interpretation of that city. What were the challenges for you to create this period? 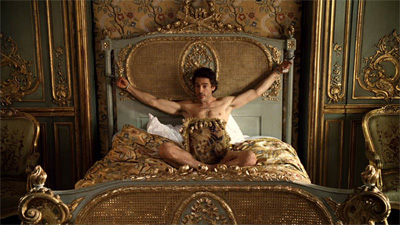 GUY RITCHIE: Well, they were all positive, I'm pleased to inform you. That, really, from the beginning of the project to the end of the project, I enjoyed the entire process. But - in terms of challenges , it's funny. Problems and challenges-you know, I can't have but feel a challenge is a puzzle that you want to triumph over, right? Where a problem is something that you just want to shy away from. And then I suppose I don't know what the next step is, after the challenge. But, the benefit of hindsight, I can't even remember any challenges now. All I remember is enjoying the process. So, nevertheless, having said that, I'm sure there were times that - I did find it rather challenging, but memory editorializes that which you want to remember, and that which you can remember. So, I've got to tell you I'm interested in portraying that period. And it really is, still, the underbelly-- which seems to be that which I'm most interested in creatively - of London.


QUESTION: And why is that?

GUY RITCHIE: I don't know, actually. I mean, partly, I suppose I got into it because I'm interested in subcultures in general. I just think this is a fertile place for entertainment. So, I think that's the most delicate way I can answer that question.


QUESTION: Now, was casting this film a challenge for you? I mean was Downey always your ideal Sherlock Holmes, and Jude your ideal Watson? Or did you really have to search for the ideal actors to play these characters?

GUY RITCHIE: All of that, again, happened rather organically. I was talking to Robert on the telephone, and I was asking Robert, actually, about something else. I had Sherlock Holmes in my lap and I was asking about who he thought a good Sherlock Holmes would be. And by happy accident, and a few hints from Rob, we reached the conclusion we came to. 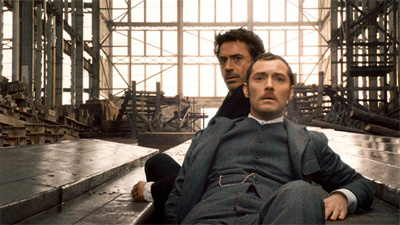 QUESTION: Now a cynic would argue, I suppose, that the movie is set up at the end for a sequel. Was that always your design?


QUESTION: Do you want to do another one?

GUY RITCHIE: Listen, I loved doing this one.


QUESTION: What about next for you, beyond Holmes? I know that there are things that you're obviously working on. What would you do if a Sherlock Holmes sequel did not come up? What is the next -

GUY RITCHIE: I don't know as a filmmaker, I really have no idea about what it is I'm doing next. I'm sitting like a hen on top of a lot of eggs. And if one of those eggs hatches, that's the chick I'll nest.


QUESTION: Finally did having so much money to spend enable you to sort of enhance your creativity, in doing this movie?

GUY RITCHIE: Yes, I think so. I think having money to spend does mean that I'm allowed to be more ambitious with both size and the color of my palette. I'm being told I have to go.

In a dynamic new portrayal of Sir Arthur Conan Doyles most famous characters, 'Sherlock Holmes' sends Holmes and his stalwart partner Watson on their latest challenge. Revealing fighting skills as lethal as his legendary intellect, Holmes will battle as never before to bring down a new nemesis and unravel a deadly plot that could destroy the country.