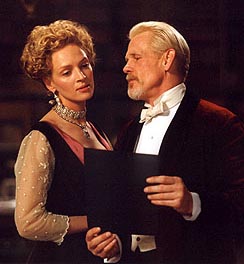 
The Golden Bowl, set in England and Italy between 1903 and 1909, is the story of two marriages entangled in a complex, almost incestuous relationship. Prince Amerigo (JEREMY NORTHAM), an impoverished Italian aristocrat, is to marry Maggie (KATE BECKINSDALE), daughter of Adam Verver (NICK NOLTE), an American tycoon and art collector.

The Prince has a last rendezvous with his equally destitute lover, Charlotte Stant (UMA THURMAN), when they go in search of a wedding present for Maggie. They find a golden bowl, but reject it as being flawed.

By a strange twist of fate, Charlotte marries Adam Verver, so that the lives of the four of them - father, daughter, and the two former lovers - become entwined into one family. Bored by their new lives of luxury, the Prince and Charlotte resume their old relationship. Maggie suspects and then discovers their affair through the fortuitous purchase of the same golden bowl they left behind.

The Prince and Charlotte may have thought to outwit the simpler, less worldly couple of father and daughter. But it is now Maggie who takes charge and manipulates the situation in an attempt to save the marriages. Finally, Maggie's father, who has kept his knowledge of the adulterous affair to himself, takes the decisive step that brings the story to its startling conclusion.