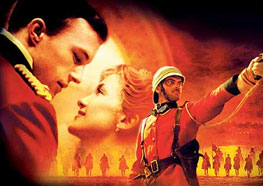 Synopsis:
Adapted many times for the screen - most famously in 1939 and most recently in 1977 - The Four Feathers has endured as a classic since the book by A E W Mason was first published in 1902. This latest epic version is from Shekhar Kapur, the director of Elizabeth.
Set against the all-too-familiar background of desert conflict - albeit one that is circa 1884 - the film is primarily the story of Harry Faversham (Heath Ledger in another role that takes him into the past). Harry is a British soldier in the Royal Cumbrian Regiment and his is a life that seems destined for success in a military career and great personal happiness. He is considered by his friends to be one of the best soldiers in the unit and he is devoted to the beautiful Ethne Eustace (Kate Hudson) the woman he will marry. Harry's best friend, Jack Dorrance (Wes Bentley of American Beauty) is also in love with Ethne but, being the perfect English gentleman, respects Harry's relationship with her.
Harry's honour is seriously tarnished when his regiment is ordered to the Sudan where fanatics have attacked a colonial British outpost. But Harry has doubts about himself, his feelings for military life and war in a far off country and he resigns his commission. Occurring when it does, his act is looked upon with contempt by fellow officers, three of who each sends him a white feather - a symbol of cowardice. A fourth feather is sent by Ethne.
Harry's father, a general who is shocked by his son's decision, disowns him, also presuming him to be a coward. Now isolated from his friends, fiancée and society, Harry discovers that his regiment is in trouble and he decides to redeem his reputation in a daring act of courage. Alone, he travels to the Sudan where he disguises himself as an Arab in order to go behind enemy lines. Helping him is the mysterious Abou Fatma (Gladiator's Djimon Hounsou) who becomes his saviour during the perilous mission.


My Verdict:
As The Four Feathers is a remake the story is not new. For first time viewers this won't be a problem, but for those who have already seen other versions, it is travelling over old ground but with new faces. Heath Ledger tries hard with a British accent as the troubled soldier Harry Faversham but never really offers any insight as to why he resigned his post. Harry seems determined one minute to desert his comrades and then does a complete turnabout to rush to save them all. Wes Bentley does a great job as Jack Torrance who is torn between his loyalty for his friend and for his country. He was wonderful as the injured, blind soldier that returned to England after battle, still loyal to his country even though he was one of the few who did return. Kate Hudson was ordinary as Ethne, and even gave the role a tough of whimsy that didn't quite feel right.
However, the battle scenes are spectacular, in particular the battle in the Sudan desert where the British form a square to defend themselves but find the Madhi (the fanatics who have overtaken the British outposts), coming at them in all directions. It really did convey that feeling of hopelessness that must have been felt by the soldiers and the futility of the exercise. The battle scenes are quite graphic with numerous shots of soldiers being killed and plenty of dead bodies. The number of horses used in the film is huge and credit must also go to them!
The Four Feathers isn't trying to break new ground rather it is trying to break a new audience who perhaps might not have any knowledge of the previous films of the same name. With Heath Ledger in the main role it is sure to win a wide audience if not for the grand battles scenes alone.