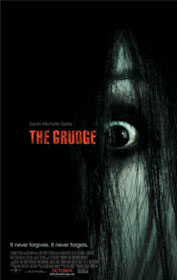 Synopsis:
In Sam Raimi and Columbia Pictures' powerful thriller 'The Grudge', based on the Japanese blockbuster 'JU-ON: The Grudge', the normal façade of a modest house in Tokyo belies the hidden terror within. It is possessed by a violent plague that destroys the lives of everyone who enters. Known as "The Grudge", this curse causes its victims to die in the grip of a powerful rage. Those who are fatally afflicted by the curse die and a new curse is born - passed like a virus to all those who enter the house in an endless, growing chain of horror.

Karen (Sarah Michelle Gellar) is an exchange student studying social work in Japan who innocently agrees to cover for a nurse who didn't show up for work. When she enters the assigned home, she discovers and elderly American woman, Emma (Grace Zabriskie) who is lost in a catatonic state while the rest of the house appears deserted and dishevelled.

As she is tending to the stricken old woman, Karen hears scratching sounds from upstairs. When she investigates, she is faced with at supernatural horror more frightening than she could ever imagine.

Within this house, a chain of terror has been set in motion resulting from a terrifying evil that was born years before. As more people die, Karen is pulled into the cycle of horror and learns the secret of the vengeful curse that has taken root in this house.

Now she must stop it before it's too late.

My Verdict:
The audiences of Japan love horror movies and they have filmmakers that have well and truly honed their skills at providing very scary movies. So much so, that Hollywood has now taken on board some of these films and created English language versions, 'The Ring' starring Naomi Watts being a very successful venture based on 'Ringu', the Japanese horror movie. Now, we are fortunate to have 'The Grudge' based on the Japanese 'JU-ON: The Grudge' (also directed by Takashi Shimizu).

'The Grudge' does have some basics horror elements familiar to western audiences, for example, a supernatural element where the evil is unseen, but it is also radically different in that the ghosts are shown in a more realistic style. There is also that annoying habit in horror movies, where the main characters always have to investigate strange noises, usually in the dark and usually alone - wouldn't most people just get the hell out of there? But that is where most of the fun stems from - just when is that scare that makes you jump out of your seat going to surface? 'The Grudge' manages to be able to make these scary moments so unpredictable which heightens their strength. Right from the start of the movie, we are literally pelted with shocking and scary scenes that are then seemingly relentless. This is not a movie that needs to slowly wind its way towards a tense scary climax, but a movie that is one decent scare after another.

The storyline of 'The Grudge' is sometimes a little predictable regarding the curse of anyone who steps foot into the house being marked. It is then a question of waiting for those who have to meet a gruesome end knowing they will, but fortunately it is how they die that is not predictable. This also brings into play the fact that this movie features Americans in Japan so these people also have to face a language and cultural barrier as well.

This is not a movie that I would recommend children see, unless you want them to have plenty of nightmares - plenty of adults will be having nightmares after seeing this, especially if you hear any unusual noises in the dark.

If you love a good scary movie, then go and see 'The Grudge'.