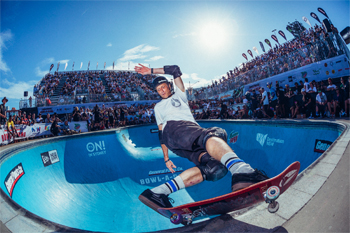 Australasia's largest and most exciting skate event is back, bigger than ever, from 18th – 19th February, 2017. The largest professional bowl event in the Southern Hemisphere, GENERAL PANTS BOWL-A-RAMA™ announces it will return to the Bondi Skate Park - over two massive days - with 3 sessions on Saturday and a further 3 on the Sunday.

Next year's event will see the return of skateboarding legend Tony -The Birdman' Hawk who praised last year's event: 'I love the Aussie skate scene - it's always been really strong, even when skateboarding wasn't as popular. The pool is a great medium - they're doing proper huge vert tricks and really textured tricks."

Joining Hawk will be an all-star line-up featuring some of the world's best known skateboarders who are ready to put it all on the line and serve up an event filled with blood, sweat and cheers.

GENERAL PANTS BOWL-A-RAMA™ not only delivers some of the best skateboarding in Australasia, but world over. The picturesque beachside location will play host to the epic event, promising two full days of big-air entertainment, music, stalls and more.

The success of BOWL-A-RAMA has inspired Destination NSW to support the event and sign on for a further three years.

Minister for Trade, Tourism and Major Events and Minister for Sport, Stuart Ayres said: 'BOWL-A-RAMA is a fantastic local event, with thousands of spectators heading to Bondi Beach each year to see the world's best skaters at one of the world's most spectacular skate park locations.

'It's great to see BOWL-A-RAMA returning for the next three years, secured by the NSW Government through our tourism and major events agency, Destination NSW. The event will provide a huge boost to local businesses, and over the next three years the event is expected to attract more than 3,500 overnight visitors to Sydney, contributing approximately $2.5 million in additional visitor spend."

Leading Australian fashion retailer, General Pants Co. has also signed on as a major partner for the next two years.

'General Pants has been heavily involved in skate events such as BOWL-A-RAMA for over 10 years. With Corbin Harris as our ambassador and some of the best international skate brands in our portfolio, the partnership makes perfect sense. One of Australia's most globally recognised skate events, BOWL-A-RAMA and its schedule of activities attract internationally renowned riders to compete in our home town. In 2017 we will play a large part in a schedule of cultural events that encompass fashion, skate, art and music - and we couldn't be more excited," said General Pants CEO, Craig King.

Tickets will be on sale from 1st December, 2016, via www.bowlarama.com.au; in partnership with OzTix. Fans are advised to get in early as event capacity is strictly limited. For more information on GENERAL PANTS BOWL-A-RAMA™ 2017, including ticketing, weekend events schedule, and athlete line-up, visit www.bowlarama.com.au.

This epic weekend on Bondi's trendy shore has been made possible thanks to event partners Destination NSW, Santa Cruz, Independent, Element, RVCA, and more to be announced soon. Limited sponsorship opportunities are still available via bowlarama.com so get in fast and don't miss out on the action.

BOWL-A-RAMA™ is Australia's biggest and best bowl skateboarding competition. A globally recognised celebration of skateboarding culture, BOWL-A-RAMA™ attracts legendary and current Pro skaters from all around the world to defend their titles. It's been the largest skate event in Australasia for 12 years running and is still the only international professional bowl skating event of its kind.