Futurama The Beast With A Billion Backs 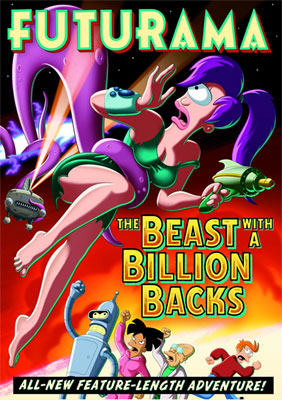 With guest appearances from David Cross (Alvin & The Chipmunks, "Arrested Development"), Brittany Murphy ("King of the Hill," Sin City), Dan Castellaneta ("The Simpsons") and world-renowned physicist Stephen Hawking, The Beast With A Billion Backs may finally meet its match!

In Futurama's latest and most tentacle-packed epic, space itself rips open, revealing a gateway to another universe. But what lies beyond? Horror? Love? Or maybe both, if it happens to contain a repulsive, planet-sized monster with romantic intentions! Nothing less than the fate of human and robot-kind is at stake as the Futurama crew takes on The Beast With A Billion Backs.

Futurama: The Beast with a Billion Backs is a full length feature epic, the second of four all-new feature length adventures on DVD.

Futurama, created by Matt Groening, the creator of The Simpsons, is set some 1000 years in the future, with a group of space-like-creatures and one character, Fry, who was time-warped from our now time to the future. The storyline is edgier than that of The Simpsons but doesnt have the obscenities that other cartoons, such as South Park and Family Guy, have.

The latest space journey takes Bender, Fry, Leela and an equally weird crew to an encounter with an enormous creature with billions of probing tentacles who actually turns out to be having relations with everyone in the universe. The story soon turns to a rich, space-like love adventure. The storyline is as equally entertaining as funny; the outrageous episode ends with some much needed relief to the horror of space and romance.

The Beast with a Billion Backs contains guest appearances from David Cross, Brittany Murphy, Dan Castellaneta and Stephen Hawking. As an audience we go through the ups and downs of Fry finding himself a new girlfriend which he chooses to move in with, then later we find that he is actually her boyfriend along with four other guys while she dates other men. Bender discovers the League of Robots is actually real and Amy and Kif have announced their love in some type of ceremony.

The episode is definitely hitting the boundaries as we see everything thing from robot genital gags and discreet sex scenes to cartoon cleavage.

The Beast with a Billion Backs is definitely tailored more towards those who were already Futurama fans.