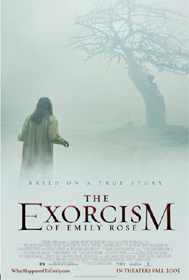 What Happened To Emily?

Synopsis:
In an extremely rare decision, the Catholic Church officially recognized the demonic possession of a 19-year-old college freshman. 'The Exorcism Of Emily Rose' chronicles the haunting trial of the priest accused of negligence resulting in the death of the young girl believed to be possessed.

Inspired by true events, the film stars Laura Linney as the lawyer who takes on the task of defending the priest, played by Tom Wilkinson, who performed the controversial exorcism.

My Verdict:
Many movies have been made about possession and exorcism since 'The Exorcist' (1973) scared the bejesus out of movie fans but none have ever quite had the same impact that shocked and horrified as Linda Blair took on a demon-possessed role. The difference with 'The Exorcism Of Emily Rose' is that it is based on a true story, which adds to the realism of the horror.

Emily Rose (Jennifer Carpenter) was a 19-year-old woman college student who was allegedly possessed by six demons and who died during the course of an exorcism after medical interventions failed to cure Emily's "condition". The medical profession believed she was suffering from schizophrenia, psychosis and epilepsy and treated her for those conditions accordingly, but Emily was not convinced and sought the help of her parish priest, Father Moore (Tom Wilkinson) who believed she was indeed possessed by evil forces and decided along with Emily's consent that exorcism was the only avenue for her.

Emily died during the course of the exorcism and Father Moore was charged with negligent homicide. Initially sceptical, he was defended in court by lawyer Erin Bruner (Laura Linney), who pursued the Father's case until she too came to doubt the prosecutions case, lead by Ethan Thomas (Campbell Scott).

Laura Linney is strong as lawyer Erin Bruner, reliable Tom Wilkinson plays Father Moore as a reserved character with a strong conviction and Jennifer Carpenter manages to contort her body and face into various poses as she wrestles with the various demons her character possesses.

'The Exorcism Of Emily Rose' is a two-fold story where the events of a dramatic courtroom case are broken by the insertion of horrific and sometimes suspenseful flashback scenes. Combining these two genres at least sets the movie apart from becoming just another schlock horror fest or a boring tedious courtroom drama although there may not be quite enough new fodder for lovers of the exorcism theme. Still, there is plenty here to keep one guessing the outcome and find out just what did happen to Emily Rose.