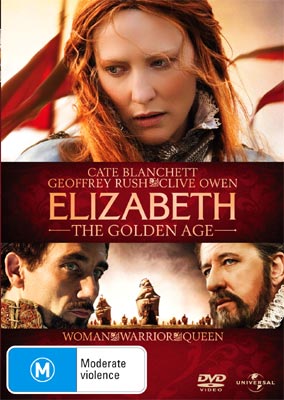 Set against the backdrop of religious fanaticism and political uncertainty of late 16th century Europe, this historical thriller continues 15 years on from the events of Elizabeth. Woven with treachery and romance, it tells the story of one woman's crusade to control love, crush enemies and secure her position as a beloved icon of the western world.

As with the first instalment, Shekhar Kapur takes the audience on an authentic journey with a tale full of conflict, mystery, love, desire, betrayal, war and empowerment.

The feel of sheer theatre is captured through the use of amazingly detailed costumes, rich visual elements and stunning backdrops.

Synopsis
The Golden Age of England, a time where on the surface, romance and peace reign free. But behind the facade, Queen Elizabeth I is battling to overcome the struggles of holding on to her throne.As Elizabeth is challenged and prepares to go to war with Spain, she must contend with her undying love for Raleigh, a man she cannot have due to her position of power, and a society whose values are quickly changing for the worse. She must fend off treachery and an intricate assassination attempt in order to achieve victory. A victory that must come at any cost. Elizabeth: The Golden Age is the epic tale of what one woman must go through in order to stamp her legacy in history.