Synopsis:
Elizabeth Gilbert (Julia Roberts) had everything a modern woman is supposed to dream of having - a husband, a house, a successful career - yet like so many others, she found herself lost, confused, and searching for what she really wanted in life. Newly divorced and at a crossroads, Gilbert steps out of her comfort zone, risking everything to change her life, embarking on a journey around the world that becomes a quest for self-discovery. In her travels, she discovers the true pleasure of nourishment by eating in Italy; the power of prayer in India, and, finally and unexpectedly, the inner peace and balance of true love in Bali. Based upon the bestselling memoir by Elizabeth Gilbert, Eat Pray Love proves that there really is more than one way to let yourself go and see the world.

Review:
A powerful journey of self discovery. Eat Pray Love is one of those movies that make you sit up and think about your own life, the choices you have made and the journey that you are on. I thoroughly enjoyed Liz's journey of EAT PRAY LOVE played by Julia Roberts. Audiences who have grown up with Julia will relate to the this seemingly mid life crisis. Don't be surprised if you suddenly feel the urge for real Italian Pizza or Pasta, or if the travel suddenly reignites. The main beauty of this story is that it shows how women & men are not so different, and that we all need a little help to navigate the right path.

Liz's story starts in Bali where she meets a wise man jurmet who foretells her future. When Liz realises that she her marriage isn't working, she rebounds to a young actor. She then embarks on a journey to Italy, India & Bali. In Italy, she learns the language, rediscovers food while making some great friends. In India Liz heals herself and a friend when she learns to calm the mind. In Bali fate steps in to lend a hand and Liz finally learns to love again. 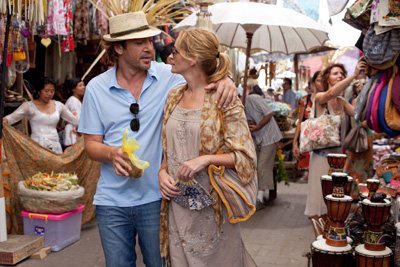 On any film, the production designer and costume designer work closely with the director as they begin designing the look of the film. The idea is that the images on screen reinforce and underscore the story and character arcs. For production designer Bill Groom and costume designer Michael Dennison, Eat Pray Love required four different movie looks - one for each of the film's locations. They had to decide how this journey would unfold for Liz, and how her journey would be underscored by the sets and wardrobe.

When Groom interviewed for the job with Murphy and Gardner, he sensed a creative energy that he wanted to be part of. "I had faith from that initial meeting that this film was going to be a very interesting process, and I was not disappointed," he says. Groom prepped for six months on this film prior to the beginning of shooting.

One of the first things Murphy, Gardner, Wlodkowski, and Groom did during pre-production was to go on a world tour location scout. As they traveled in the same places that Elizabeth Gilbert had written about, the creative inspiration for the production design came flooding in. Groom began to sketch out the four elements of Earth, Air, Fire, and Water, representing the look and feel of the very distinct worlds of New York City, Rome, India, and Bali, respectively.

Groom lives in Brooklyn, New York, so designing that portion of the movie came to him organically. He saw New York as being part of an Earth element palate, using grays, blacks, and browns and textures like concrete, granite, and stone to illustrate the somber life Liz felt stuck in and hammer home the emotional state of the story.

At the beginning of the film, Dennison says, "New York had the coldest feeling and the costumes reflect that. They have the least amount of color in the film. It is a desaturated, diminished color world."

While in Rome, Murphy commented that that section of the film would echo the intense loneliness that Liz was feeling after her break-ups. For Groom, the Air element could stand for that emptiness. Most of these scenes took place in the fall, so there was a lot of wind and space in the 2000-year-old city. "Rome is where Liz breathes," says Groom. "She opens the windows, the curtains are blowing, and she finally lets go of her life in New York, takes a deep breath and starts to eat." 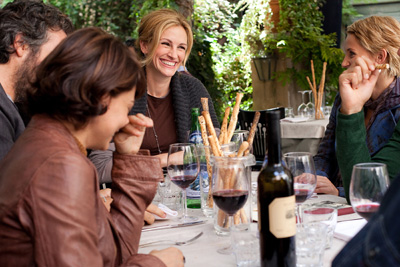 To contrast this section of the film with the colors of the New York sequence, Groom chose "the creamy, light, white colors of the wind and air," he says.

Dennison chose autumnal colors for Rome, not only because Liz is there at that time of year, but also to play off of the city and its residents - through the costumes, audiences can see Liz transform into more of an Italian woman as she becomes more comfortable in her environment. "The Italians' sexuality exudes from their pores, in the city, in their food, and, of course, in the way they dress. I did need for Liz to start feeling like she was becoming a part of Rome, and her Italian friends palettes reflected each other," says the costume designer.

Upon his first location scout trip to India, from the moment Groom stepped off the plane, the element for India would be Fire. As Liz relinquishes control of her life, her emotions explode into a brilliant display of reds and oranges. Groom says he read somewhere that India is the most decorated place on earth - even something simple and ordinary, like a truck carrying cargo on the road, is embellished with paint and texture.

"India becomes a riot of color juxtaposed against the stillness of the spirituality," says Dennison of the costumes in the sequence. "India is unique and mystical. It is the center of spirituality. People surround themselves with the vibrancy of color and the vibrations that color brings, and that places them in the liveliness of life. In some instances, we heightened the color, because we are telling a story. It was very important psychologically and subliminally that you have that feeling of buoyancy."

Also in India, Groom created an elaborate wedding. He relished the opportunity - and was gratified that his work was taken for the real thing. "Even the most humble of weddings are colorful, decorated, vibrant events that involve the entire community," he says. "Ours was convincing enough that some of the members of the community where we were filming were a little upset they hadn't been invited to the festivities." 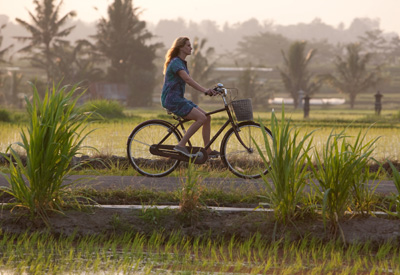 When in Bali, Groom was overwhelmed by the beautifully intense natural environment. In this part of the story, the romance between Liz and Felipe as Liz learns to find a free-flowing balance would pair nicely with the blue and green hues of the Water element.

"When you arrive in Bali," says Groom, "you are struck by the reflections of the sky in the rice field terraces, the roaring rivers that seem to sneak up on you, the volcanic lakes, and the beaches that remain pristine. For both Ryan and me, this was something we wanted to express in the movie."

In Bali, Liz feels vibrant, free, and alive, and that is reflected in the intense color palette and lushness of the clothes. "This is the roller coaster part of the movie," says Dennison. "Liz is going through so many different emotions and exhibits her vulnerability in her love for Felipe."

Where they could, the filmmakers chose to shoot in the real-world locations mentioned in the book. Though it was not always possible, there were some cases where the production could not resist. For example, production designer Bill Groom met the real life Ketut Liyer and toured his Balinese compound, intending to get inspiration. However, Groom knew right away he couldn't improve on the real-life environment. In the end, says Groom, "Not only did we shoot at Ketut's house where he currently lives with four generations of his family, but we even ended up pulling from one of Ketut's real-life drawings to create the prop of the drawing Ketut presents to Liz on her first trip to Bali."

In all of the film's locations, Groom and Dennison set up art and costume departments, working with local teams to prep the look of each country. Local artisans - from rice farmers creating a paddy in Bali to seamstresses creating 100 saris for the Indian wedding - added details, workmanship, and authenticity to the sets and costumes that enriched the film, even though many, perhaps most, of these artists had never worked on a movie before. 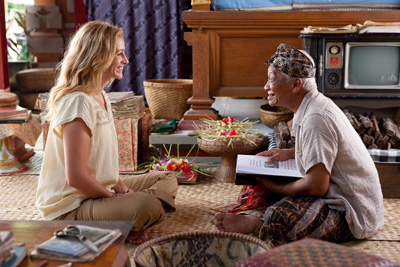