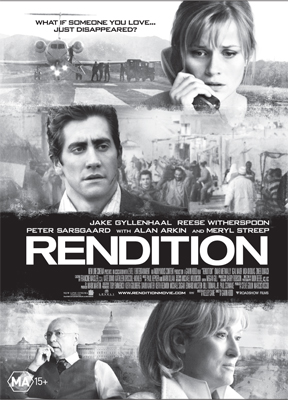 Synopsis: Spanning two continents, Rendition tracks the lives of Douglas Freeman (Jake Gyllenhaal), a CIA analyst based in North Africa who is forced to question his assignment after he witnesses the brutal and unorthodox interrogation of an Egyptian-American by secret North African police; Anwar El-Ibrahimi (Omar Metwally), the Egyptian-American chemical engineer whose family emigrated to the States when he was a boy, and who is now suspected of a terrorist act; his pregnant wife Isabella El-Ibrahimi (Reese Witherspoon), who does everything in her power to find her missing husband, who has seemingly disappeared during a flight from Cape Town, South Africa to Washington, DC, by enlisting the help of a politically-connected college friend; Alan Smith (Peter Sarsgaard), an aide to Senator Hawkins (Alan Arkin), who uncovers the troubling fact that Anwar has been shipped off, on the orders of the CIA's head of terrorism; Corrinne Whitman (Meryl Streep) to a third world country for interrogation; and Abasi Fawal (Igal Naor), the head of the secret prison who has personal problems of his own with a rebellious daughter Fatima (Zineb Oukach) and her Islamic fundamentalist boyfriend Khalid (Moa Khouas).