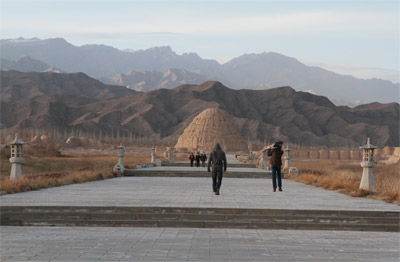 Synopsis: For centuries Bordeaux has commanded an almost mythical status in the world of wine as a symbol of wealth, power and influence. While its great estates have beguiled kings, emperors and dictators alike, its prosperity has always been tied to the shifting fortunes of global economies. As great nations rise and fall, so does the fate of Bordeaux. Now, something unprecedented is happening, and that something is China. Traditional customers like the United States and the United Kingdom are bowing out, unable to compete, as the Dragon economy's new wealthy push prices to stratospheric levels.

While China could bring untold wealth to Bordeaux, the terms of engagement are different from any other customer in the past. This massive emerging market is seductive and voracious but also unpredictable, and with Bordeaux's fine wines now elevated to luxury goods status, they have fallen victim to the world's most rampant and notorious counterfeit trade. Will the China market be the bubble that never bursts or the biggest threat yet to Bordeaux's centuries old reputation?

Narrated by Academy Award© winner Russell Crowe, and filmed for the big screen on the new Arri Alexa cameras, Red Obsession follows a modern-day silk road through the prism of Bordeaux's ethereal wines. It observers the extraordinary financial risk people are prepared to take in pursuit of their passion. The film confronts the modern dilemmas facing the Bordeaux vigneron at a time of great global uncertainty, where one poor decision could put at risk a reputation built over hundreds of years. And in this -Asian Century', the film confronts our pre-conceptions and easy stereotyping of other customs and traditions. Set against the stunning landscapes of Bordeaux and China, Red Obsession is the story of two disparate and powerful cultures finding common ground over their love of a delicate wine.

The feature documentary, Red Obsession was born when Master of Wine Andrew Caillard encountered filmmaker and vigneron Warwick Ross on a Qantas flight between Sydney and London in 2010.

At that time 'a contagion of optimism and extravagance" was sweeping through the legendary vineyards of Bordeaux. The great dragon of the East was awakening. Primed by the Hong Kong Government's abolition of the wine tax and enthralled by the rarity and price evolution of Bordeaux's famous first growth estates, cashed up Chinese collectors were already dominating the auction rooms of London, New York and Hong Kong. Almost every week new price records hit the headlines and Bordeaux's traditional customers in Europe and the US were rapidly being forced out of the game. 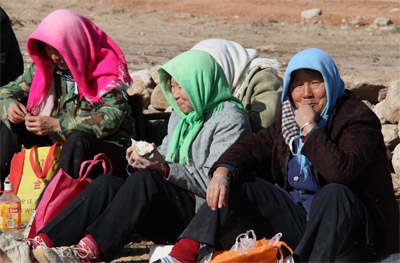 With the lure of a huge emerging market and the promise of glittering wealth, it looked like Bordeaux was on the cusp of the greatest upheaval in its 400 year history.

And there was another thing. All indications coming from the winemakers of Bordeaux were that their 2010 vintage would be a second 'vintage of the century." Perfect vintages like the 2009 are rare. Two perfect vintages in a row are almost unheard of. Add to that mix a rampant emerging market, the GFC as well as a fast developing European Debt Crisis and anything could happen. Andrew Caillard believed that not only was there a story to be told – it had to be told now. The Bordeaux -En Primeur' campaign, where the new vintage is revealed to the world and the new prices set, was due to take place in a matter weeks.

Through his company Lion Rock Films, producer/co-director Warwick Ross quickly put together his team and by early 2011 they had assembled in Bordeaux. They include David Roach, the AFI nominated screenwriter and co-director. There was young executive producer, Robert Coe, Emmy Award winning cinematographer Lee Pulbrook and sound recordist Grant Lawson, The team would later by joined by cinematographer Steve Arnold, editor Paul Murphy and award winning composers, Burkhard Dallwitz and Amanda Brown.

Wine writers and critics were also sought out for their option. People like France's most famous wine critic, Michel Bettane, UK wine critics Janice Robinson MW, Steven Spurrier and writer and broadcaster, Oz Clarke. There was the world's most famous interviewer and wine lover, Sir Michael Parkinson as well as filmmaker and owner of Inglenook Winery, Francis Ford Coppola.

As the Bordeuax story began to take shape it became clear that a strange phenomenon was developing. Because these first growth wines were now a more lucrative investment than gold or the stock market, the wine was fast becoming too valuable to drink. Thousands of cases of some of the world's greatest wines like Chateau Lafite and Chateau Margaux were sitting in warehouses like bullion, being bought and sold but never opened. The production moved to London to seek out significant players in the wine commodity business for their opinion. People like Gary Boom of Bordeaux Index and Simon Staples from Berry Bros and Rudd.

It soon became clear that if Red Obsession was to tell the full story of this extraordinary movement in the world wine, the production would need to travel to China. Over the following 12 months the film crew moved between Hong Kong, Beijing and Shanghai talking to wine critics and China observers like Asia's first Master of Wine Jeannie Cho Lee, Christie's Head of Wine, China Simon Tam and wine critics Ch'ng Poh Tiong and Fongyee Walker. The team tracked down billionaire wine collectors like sex toy magnate Peter Tseng, doll manufacturer George Tong and head of Tesiro Jewelry Richard Ghen who had just bought a chateau in Bordeaux.

When the Chinese population of 1.4billion began turning its attention to grape wine, experts worked out that within 20 years, the entire output of the world may not be enough to satisfy the new market. So China began planting grape vines. The Red Obsession crew visited the wine regions of Yantai in Shandong Province, Ningxia Province and Xinjiang Uyghur Autonomous Region in China's vast and remote far north-west. They filmed vineyards in the shadow of the Great Wall and new vine plantings on the bleak, gravelly plains where Genghis Khan was killed.

Warwick Ross believed that if they had postponed filming even for a few months, the perspectives, enthusiasm and atmosphere on invincibility may have been lost. He says, 'I feel we have captured an astonishing moment in time." 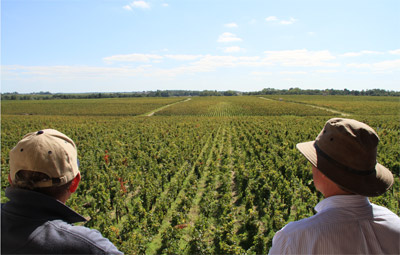 Having been born in Hong Kong in the 1950's, I've witnessed its transition, frequently tumultuous, into a post colonial society, driven by influxes of refugees from mainland communist China, their aspirational ambitions and the evolving nature of the political system - Particularly as the mainland Chinese government has increasingly imposed itself on the island's administration since the 1997 hand-over.

As such, China has always held a fascination for me - and being a vigneron here in Australia, wines have always been a passion. So, when the opportunity arose to combine these two seemingly disparate subjects in a documentary about China's burning obsession with Bordeaux's finest wines, I couldn't resist.

An acquaintance (subsequently good friend), Andrew Caillard MW, and I found ourselves on the same flight from Sydney to London in late 2010. Andrew knew I was a filmmaker and a vigneron and I knew of his reputation in the Australian wine industry as a Master of Wine (a qualification so rare that there are more astronauts than MWs).

As the hours passed on the flight, I became more and more intrigued by a region I had known by reputation, but he knew intimately – Bordeaux. Prices had been skyrocketing over the past two years for one reason – China. In fact, despite the Global Financial Crisis having decimated the US and UK markets for these rare and desirable wines, China's economy had been powering, minting new millionaires at an incredible rate. I began wondering: What happens when the world's most voracious and cashed-up consumer of luxury goods turns its attention to a rare and ethereal but strictly limited product? After some research, I discovered the astounding fact that with prices being driven to such stratospheric levels, many of these wines had become too valuable to drink - Commodity traders were now buying and selling these wines like gold or oil. Their clients were seeing spectacular profits without ever seeing the wines. An investment in Bordeaux red wine was now outperforming all the major markets including the Dow Jones and the FTSE.

To top it all off, in early 2011, the Bordeaux rumour mill was touting the soon to be released 2010 vintage as 'the Vintage of the Century". With China primed to pay anything for it, this seemed to be shaping up as the -perfect storm' of the wine world.

Our narrative essentially explores the post-GFC power shift from the West to the East through the prism of the world's most coveted wines.