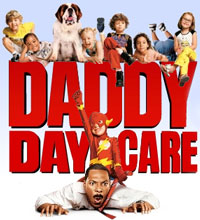 Synopsis:
He brought the Klumps to life in The Nutty Professor, talked to the animals in Dr. Dolittle and gave attitude to a donkey in Shrek. Now, Eddie Murphy enters the world of day care. In the hilarious comedy Daddy Day Care, two fathers (Murphy, Jeff Garlin) lose their jobs in product development at a large food company and are forced to take their sons out of the exclusive Chapman Academy and become stay-at-home fathers. With no job possibilities on the horizon, the two dads open their own day care facility, 'Daddy Day Care', and employ some fairly unconventional and sidesplitting methods of caring for children. As 'Daddy Day Care' starts to catch on, it launches them into a highly comedic rivalry with Chapman Academy's tough-as-nails director (Anjelica Huston) ...who has driven all previous competitors out of business.