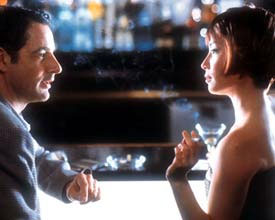 Never Forget Who You Are

Synopsis:
Morgan Sullivan (Jeremy Northam) is an out of work accountant who is stuck in an unhappy life in the suburbs, a miserable marriage, and dreams of one day sailing away to a life of freedom and excitement. Seeking and escape from his lacklustre existence, and his overbearing wife, he decides to join the multinational corporation Digicorp to become a company spy.

Adopting a new identity, he is sent to spy on various trade conventions where he secretly records the proceedings and transmits the information to Ed Finster (Nigel Bennett) his ruthless, intimidating corporate boss.

While carrying out his assignments Morgan encounters and elusive and beautiful woman, Rita (Lucy Lui) who reveals to him that his Digicorp activities have beena ruse to brainwash him and others like him. With some hesitation Morgan accepts her offer of anti-brainwashing drugs and is ultimately forced to work for Frank Calloway (Timothy Webber) a seemingly friendly agent from a rival company, Sunways. Calloways, congenial demeanor masks his ruthless motives.

As a double agent, Morgan's survival lies deep in his mind and actions but he's having difficulties distinguishing reality from the visions that plague him.
Morgan knows he must escape this nightmarish situation. His only hope is Sebastian Rooks; an enigmatic deep-cover operative who is Rita's boss. To be saved by Rook's, Morgan must complete one final assignment.


My Verdict:
Cypher is an intriguing, stylish movie. It is a different kind of science fiction movie in that what is happening takes place in the future although we don't actually know how far in the future. The movie does not rely on spaceships, distant planets, fancy special effects and the like, to fit the science fiction genre but rather, it is our perception of who we are that is explored.

Jeremy Northam is perfect as Morgan Sullivan. He wants a little more out of his banal existence and seeks more as a corporate spy and Jeremy has just the right look to convey those tiny moments of excitement that Morgan is seeking as he ultimately becomes a double agent. Morgan continues to meet more people until he is at the point where he becomes confused about who he can trust. The more he uncovers, the more he is mystified. Along the way, he becomes involved with Rita who remains an enigma to him. Lucy Lui has an air of mysterious sophistication, which she lends ably to the role of Rita. Lucy is probably most famous for her roles in Charlie's Angels and TV's Ally McBeal and in Cypher we see yet another side to her range of skills. The support cast are perhaps not as well known but are certainly more than adequate.

Cypher has an almost monochromatic visual style, deliberately used to portray the future. It is very cool looking with its predominant use of blues, silvers, whites, greys and to a lesser extent black. It is also very slick and tense and leaves the question of who we are still wide open upon its conclusion. It is a movie that will make you think and also ponder that elusive question. Will you be able to decipher it??