At 24, beautiful British actress Carey Mulligan is making quite the name for herself on both sides of the Atlantic. Mulligan impressed British TV audiences with her performance in the recently acclaimed adaptation of Dickens' Bleak House, before landing the pivotal role of Jenny in the An Education, set in the early 60s with Mulligan starring as a teenager whose road to Oxford is faltered when she meets an older and charming socialite. The actress will also be seen in next year's Oliver Stone Wall St sequel. PAUL FISCHER sat down with Ms Mulligan during the Toronto Film Festival for this exclusive interview.


QUESTION: You're being touted as the next big thing, or the next best thing, or whatever it is. The media likes to do that. are you bemused by that, surprised? How do you feel about it?

CAREY MULLIGAN: Bemused, surprised. Yeah. Weirded out, I guess. You know, it's really strange. I've spent sort of five years playing lots of supporting parts, and practicing a lot. And An Education never felt like a big film to me, and I didn't think it would - I didn't know that it was going to get bought or picked up at Sundance. And so it's strange, but also, day to day, nothing's really changed. It's afforded me more opportunities to meet people this year, and do films that I might not have been involved in otherwise. But I think I would have worked this year anyway. So, my life hasn't really changed much, except now we get to travel a little bit with the film, go to Telluride, which is amazing. But, yeah, it's a strange thing, but it is a very industry thing. The buzz thing is a kind of weird idea. Buzz. What does "buzz" mean? It's weird.


QUESTION: What was the process of you getting An Education?

CAREY MULLIGAN: It was three auditions. I went and auditioned with a casting director. Then I went in and read with Peter and then I went in for a third time, and read with Lone. So, that was over a really long time, actually, because the film was independently financed, and the financing fell through, and it went away at some point. There was a previous director. You know, all that sort of thing went on. So it was about a year and a half from the first time I read it, to getting the job and then another sort of five months until we filmed it. So, it was a two-year thing for me, really. 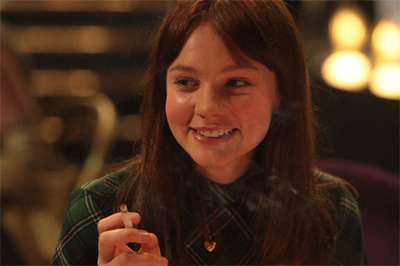 QUESTION: Does that ever get frustrating?

CAREY MULLIGAN: Yeah and heartbreaking when it doesn't work out. I mean, if I hadn't got the job. But I think if you're not really upset when you don't get something, then you didn't really want it enough and I think you should only do the parts that you really, really, really can't live without doing. And that's how I felt about this part. I was so - I was ridiculously uncool about it. I would ring my agent, like, daily, and be like, "Have you heard anything?" For ages and ages and ages. So, it - I mean, when I got the job, I was just - it was just - it was a dream. One of those real surreal days.


QUESTION: Was Jenny an easy character for you to identify with?

CAREY MULLIGAN: Yeah. In some respects. I mean, I certainly felt when I was at school, that real frustration of education for the sake of sort of passing tests, and ticking boxes. I didn't really feel like it was really enriching me in any way. I felt like I was doing it for other people, or I was doing it for my parents, or I was doing it for my school. I didn't feel like it was making me kind of a richer, more interesting person. I thought - you know, this is just so I can tick this box. And then if I tick that box, I can get into this place, or - so, I kind of get that. Like, I didn't understand why I was doing the things I was doing at school. And - but, you know, other things, not so much. But also, you know, Jenny is much more intelligent than I was. And she was a lot - she's sort of more bold than I would have been back then. I don't think I would have got in a car. You know? So, actually, when we were filming it, Lone specified on the day of shooting that I should only get into the car if he convinced me to. You know? Cuz it was - it was raining. They put on a lot of rain in the rain machine. And it was a case of, only get in when you trust him. Or, you think you can trust him enough to - to get in the car. And so - but she's braver than I am. I don't think I would have got in. I think I would have been like, "Do you know what? I'm going to get a taxi. I'll wait." 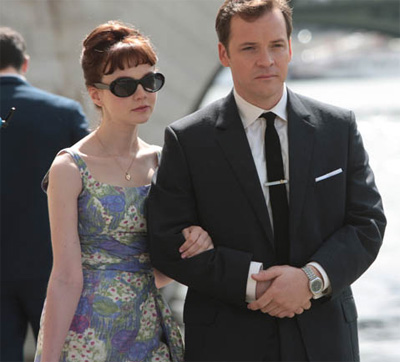 QUESTION: So much of this film is about that period of time. And she's a kind of product of her time. Is that difficult to play as an actor? I mean, how do you tap into that sensibility?

CAREY MULLIGAN: I mean, it was a lot about the time, and it did feel like a static period in history in England, but what I mainly focused on was that her life was mirroring what was happening in England, you know? She lives in a claustrophobic environment with people who don't understand her. She doesn't really have anyone that she connects with in her life. You know, her friends aren't as intelligent as she is, and neither are her parents. And she's not motivated by - to become her mother. She's just no interest - there's no connection there. And that - you know, nothing exciting has happened yet. She's had nothing that's pulled her out of her world yet. And - and David kind of represents the latter half of the '60s. And he brings that to her, and introduces her to - and you see, in the design of the film - you know, the environment in her house is very kind of - the food all looks terrible, and the walls are gray, and everything feels claustrophobic. And then when she goes with David, the colors are bright, and pop, and the music - it's musical and exciting and beautiful. And - and I focus more on that, about her being brought out of this claustrophobic environment, and into this more exciting world, than I did about the actual period of time in history. Because it's impossible to - you know, put yourself there completely.


QUESTION: Well, Nick Hornby refers to that period of the '60s as sort of an offshoot of the Second World War. Did you feel that as well?

CAREY MULLIGAN: I felt that I had a certain tolerance for my parents that I might not have had, because I knew what they had lived through, maybe. But no - I mean, I was aware that my character would have probably been rationed until - you know, her family would have been on rationing for the first years of my life. But - and it did feel like a - it just felt like a static time. It felt like - a country that had recovered. But it didn't feel like a fun time. It felt like we were still sort of enduring and surviving, and it wasn't really - it wasn't about sort of enjoying life. It was about just sort of getting places, you know? Achieving, and moving on in the world, but not having any fun doing it, I think. 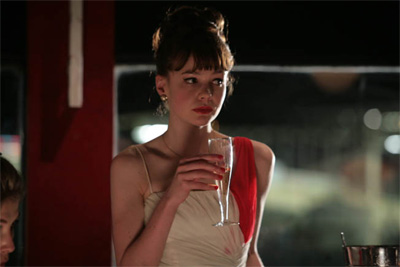 QUESTION: How challenging has it been for you, up to this point, to find the kinds of work that you really want to find in an industry that has very up-and-down moments in England?

CAREY MULLIGAN: I've pretty much worked since I've started acting, and I've been really lucky in that respect. I suppose when you start doing bigger parts, or bigger projects, you work less, in a way, because you want more time to prepare, and you spend more time kind of gearing up to do a job. But I've always been lucky. I've always been able to mix up TV and film and theatre, and do all three. And that's what I want to carry on doing. I'm trying to do a play next year, but, you know, it's never been, like, scripts sent in, and me just pick and choose. The parts that I really want have always been parts that I've had to fight for. And I think - Peter was saying something interesting, earlier. That you can easily go back and play parts that you've played before, because people will cast you, because they know you can do it, and that's what you're known for, and it's comfortable. But actors never want to go back and do what they're known for. They want to go and do something that will challenge them. So the parts that I'm now looking at are parts that I've never played before. And that's what I love about Wall Street.


QUESTION: What was that experience like, to audition for Oliver Stone?

CAREY MULLIGAN: Oliver saw An Education, and offered me the job after that.


QUESTION: Really? So, you didn't even have to audition for him.

CAREY MULLIGAN: I didn't. I would have been beyond - terror wouldn't have even described it if I'd had to audition for Oliver.


QUESTION: How surprised were you that this little movie got you an Oliver Stone movie? 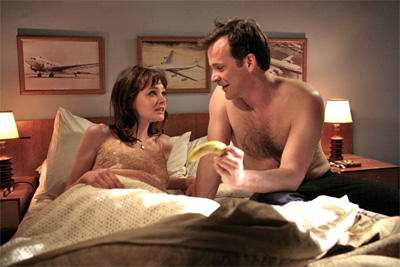 CAREY MULLIGAN: Completely and utterly, madly blown away. I remember when my agent rang me and said, "Oliver Stone's seen the film, and he's going to call you." I was sitting with Andrew Garfield, who was in Never Let Me Go with me, which is a film I did earlier in the year. And we were having sushi. And I was like, "Oliver Stone's going to call me." And my agent was like, "Yeah." And I was like, "Umm!" So we got hands-free and plugged it into the phone so that Andrew could listen, because Oliver was in the car, on the phone. I couldn't handle having that conversation with no one else hearing it, because I sort of somehow didn't believe it was real, and I needed Andrew to confirm that it was real. And so we both sat there like that, with the phone being like "Hi, Oliver Stone." Like, completely, completely mad.


QUESTION: Is this going to be very much a film about the financial crisis of today? I mean, is it a product of today?

CAREY MULLIGAN: Yeah. It's a fictionalized version of what happened in 2008, yeah and I play Gordon Gecko's daughter.


QUESTION: Do you have some choice scenes with Michael Douglas?


QUESTION: What are you doing after that, do you know?

CAREY MULLIGAN: No, I don't.

Jenny (Carey Mulligan) is a bright young girl on the cusp of her 17th birthday who finds herself in a whirlwind romance with a much older David (Peter Sarsgaard). Prior to meeting David, Jenny was trying to excel in her life by going to a prep school to get into Oxford.

Once she sees the lifestyle David can provide, one she never imagined might so easily be hers, she is hooked and thoughts of Oxford go out the window. Then, when things are looking pretty good for Jenny with the dashing (yet a little too smooth) David, the truth hits her like a ton of bricks. Jenny goes from being a bright eyed school girl to a sophisticated young lady and then all the way back to questioning if she really knows who she is at all. 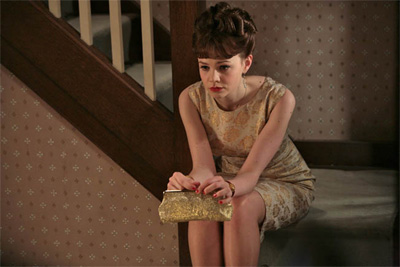 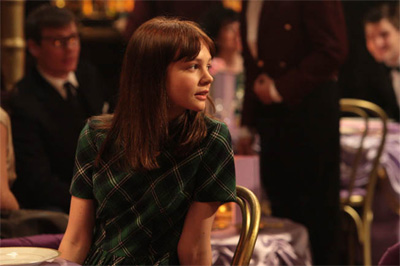