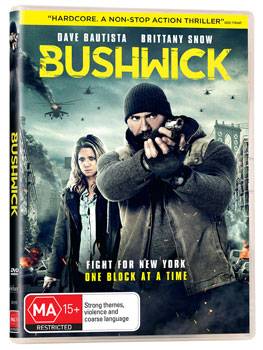 Dave Bautista and Brittany Snow go to battle on the streets of New York!

Defiant Screen Entertainment is proud to present Bushwick, a hard-hitting new film from the producer of The Raid 2.

As America stands on the brink of a second civil war, Lucy (Snow) steps off the subway and walks into a bloodbath on the streets of her Brooklyn neighbourhood of Bushwick. Faced with total destruction around every corner, she takes shelter in the basement apartment of a burly ex-Marine named Stupe (Bautista). Reluctantly he agrees to help her traverse the treacherous five-block stretch of Bushwick, fighting off local gangs, riots, and continued attacks from the invading soldiers, in an attempt to escape the city.

The film stars former professional wrestler and mixed martial artist, Dave Bautista, best known for his role as -Drax the Destroyer' in the Marvel feature Guardians Of The Galaxy, and currently appearing in Australian cinemas in Blade Runner 2049. He co-stars with Brittany Snow, one of the brightest and most engaging acting talents to emerge in recent years who is reprising her character from the box-office smash hit Pitch Perfect in the upcoming Pitch Perfect 3.

Bushwick, initially conceived of seven years ago, was inspired by several actual events. These included, but were not limited to; Former Texas Governor Rick Perry's comments that instigated a small Texas secession movement; the U.S. Government's responses to natural disasters; current U.S. Foreign Policy; and global terrorism. They all added fuel to the story. The 2015 Paris terrorist attacks occurred the day before production started, blurring the directors vision of the movie with reality. 'The news footage was surreal to see, as we had recently designed the look of our black-clad mercenaries. Our fictional storyboards looked eerily similar to the scenes we saw on the news from Paris - contemporary storefronts and cafes smoking and destroyed as snipers hid on rooftops" said Milott and Murion.

Wanting to make Lucy and Stupe's experience appear as real as possible, Milott and Murion said 'Our goal was to stay with our characters - in real time - the entire length of their journey. We filmed in a series of long takes, emphasizing the performance and camera movement, to keep the emotional focus on the two main characters. This brought a sense of intimacy, authenticity and credibility to this violent, unimaginable situation. Overall, we wanted to create a simple story of survival filmed in a unique way. The issues we saw seven years ago, which originally informed our vision, continue to pertain to our country's current political climate in new and troubling ways."