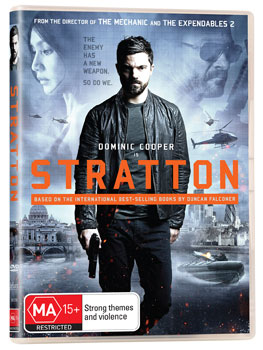 The enemy has a new weapon. So do we.

Defiant Screen Entertainment is proud to present Stratton, the first film based on the series of best-selling books by Duncan Falconer.

During WWII, The British Navy created an elite, secret squadron to carry out its most dangerous and classified missions. Known as the Special Boat Service (SBS), the unit proved so effective it was often assigned to work beside MI6, and later became the basis of the U.S. Military's Navy Seals. Like the Seals, the SBS continues to operate, largely in darkness, around the globe to this day. It is led by highly-trained, highly-decorated men who honour the traditions of its founders.

Dominic Cooper (Preacher, Warcraft) plays the lead role of Stratton, a determined and dedicated SBS operative working to prevent an international terrorist attack in London. When a mission to target a biochemical weapons laboratory in Iran goes horribly wrong, it sparks a deadly race against time for Stratton and his team to track down a rogue Russian agent, before he unleashes terror on the city. Rounding out an impressive ensemble cast is Thomas Kretschmann (Downfall, Valkyrie), Connie Nielsen (Wonder Woman), Tom Felton (the Harry Potter franchise) and Sir Derek Jacobi (Cinderella, Gladiator). The novels which inspired the screenplay were written by Duncan Falconer, himself an ex-Special Boats Service (SBS) operator. Falconer joined the British Royal Marines at the age of 18, then immediately after commando training, was one of only 9 men (out of 147) to successfully complete the SBS training course. After leaving the military, Falconer's autobiography -First Into Action' was published, packed with stories of actions carried out by the SBS and the 14th Intelligence Detachment. Following the books success, he was contracted by Time Warner to write two novels, which led to the creation of the protagonist John Stratton, who was based on the author's own experiences and career. Since the publication of the first novel -The Hostage' in 2003, there have been 8 novels in the Stratton series.

Simon West, renowned British director of iconic action films including Con Air and Expendables 2 had been looking for a project of this sort for years; one which featured a new spy hero with the Britishness of Bond and the relatability of Bourne. 'I always thought there was a gap in the market…that there was room for another British hero out there. I thought if I could find a project that had all the action and excitement of something like [Bond], but maybe a little more contemporary, more realistic."

After signing on to the project, West set to work reading the books and researching the Special Forces and the SBS in particular. He said, 'When you get into the research of this world, you realise that what happens in these real missions is that all the things that you are familiar with maybe MI6 agents doing [from books and films], in reality…MI6 will use the muscle of Special Forces… whether SAS or SBS". According to West, 'Stratton is a classic international story. It's very glamourous, it has lots of action but at the heart of it, it has a great hero."