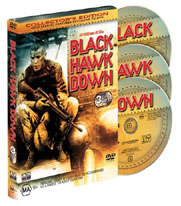 "Breathtaking, this is the best war movie I've ever seen" Larry King

From RIDLEY SCOTT (acclaimed director of GLADIATOR) and renowned producer JERRY BRUCKHEIMER comes BLACK HAWK DOWN ­ a gripping true story of bravery, camaraderie and the brutal reality of war. This Academy Award®-winning tour-de-force is now available in an historic 3 disc DVD set, fully-loaded with over 12 hours of extra features that will take you to the frontline of the making of a movie masterpiece.

The highest-selling DVD in the War genre and the fourth best performing DVD overall during December 2002*, BLACK HAWK DOWN is certain to be even more popular as a special COLLECTOR'S EDITION and a must-have addition to any DVD collection.

Disc One features a total of three audio commentaries including one by director RIDLEY SCOTT and producer JERRY BRUCKHEIMER as well as a special commentary by 1993 U.S. Special Forces team veterans, providing a real-life insight into combat and the experience of war.

Disc Two boasts no fewer than eight never-before-seen deleted scenes with optional director commentary as well as seven featurettes in 'Image and Design'. This feature gives the viewer a total movie-making experience, exploring the creation of the movie including 'Jerry Bruckheimer's on-set photography', 'Ridleygrams', storyboard to final film comparisons and extensive photo galleries. 'The Essence of Combat' comprises six behind-the-scenes features including an exclusive insight into the physical preparation by the actors for their roles in actor's bootcamp as well as an in-depth look at the film's visual effects and music.

Disc Three contains 'Ambush in Mogadishu', a brilliant 60-minute documentary on the making of the movie with cast and crew interviews as well as 'The True Story of Black Hawk Down', a 92-minute History Channel documentary on the events that inspired the movie. Three Q&A sessions with BAFTA (featuring Ridley Scott, Jerry Bruckheimer and the cast), Editor's Guild (with editor Petro Scalia) and American Cinematheque (with Ridley Scott and Jerry Bruckheimer) allow you to delve into the minds of both the cast and crew on the making of the movie, described by Rolling Stone magazine as "one of the best movies of the year."

See selected scenes from a different perspective with 'Target Building Insertion', a multi-angle deconstruction with optional commentary and enjoy one of the songs from the soundtrack with Gortoz A Ran ­ J'Attends music video performed by Lisa Gerrard and Denez Prigent.
NB: This COLLECTOR'S EDITION will NOT replace the single disc BLACK HAWK DOWN DVD that is currently available. Two versions will now be available.

Coinciding with the release of the COLLECTOR'S EDITION DVD, BLACK HAWK DOWN standard edition is now available to own on Video this May.