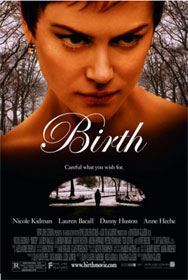 Careful What You Wish For

Synopsis:
On a wintry day, a young man collapses and dies while jogging in the park. That same moment, a baby is born.

Does one mans end have any connection to another's beginning?

My Verdict:
The opening sequence for 'Birth' follows a jogger for a very, very long time through a snow-laden Central Park, New York, complete with a dramatic score to eventually finish when the jogger collapses (and dies) beneath an overpass.

Fast-forward ten years and meet Anna (Nicole Kidman), a young Manhattan widow of affluence and privilege whose husband Sean was the jogger who collapsed and died. Anna has reached the point where she now feels she has recovered from the death of her husband sufficiently to agree to marry the ever-patient Joseph (Danny Huston). A party is held to celebrate the announcement of their engagement where the main characters of 'Birth' attend, including a young boy, Sean (Cameron Bright).

At another party for Anna's mother, Sean arrives and announces that he needs to speak to Anna in private, who obliges him with curiosity. When Sean declares to Anna that he is the reincarnation of her late husband Sean, Anna thinks that this young 10-year-old Sean is cute but is a little unnerved by his claim. As time passes, and Sean reveals more and more about himself via letters and visits, including things that only Anna's husband could have known, this further fuels Anna's suspicion that this young Sean is indeed her husband. She suffers emotionally whilst trying to deal with this situation, only reaching a kind of resolution after much anguish and confusion.

Stylistically, 'Birth' is almost monochromatic with colour being used intentionally very sparingly. This is a character driven movie where emotions, personality, moral fibres and behaviours are the essence. There is something very classy about the refined sets and costumes, which is emphasised by the lack of vibrant colour, which keeps the attention focussed on the players.

There has been some debate regarding certain scenes in 'Birth', including a scene where Anna and Sean have a bath together and a scene where they kiss, but there really isn't cause for concern as the scenes are all totally in context, although some may still find these scenes offensive. There is also a very long still close-up shot (over 3 minutes) of Anna as she sits in a concert and realises the implications of the ten-year-old Sean really being her late husband. Whether or not this shot is too long is hard to determine, but it is Kidman's face here that conveys the pure emotional hell her character is going through.

The cast of 'Birth' are outstanding, with a reserved Nicole Kidman looking almost like stranger with very short-cropped hair, Danny Huston suitably frustrated with Anna's obsession of Sean, Anne Heche unnerving as Clara, supposed best-friend to Anna and Sean, the ever-elegant Lauren Bacall as Anna's mother, Eleanor, and an excellent performance from the 10-year-old Cameron Bright.

'Birth' is a deeply moving polished drama, not exactly the most exciting movie but certainly one that is thought provoking as it delves into obsession with the past and the implications this has on the future and it is certainly worth seeing for the fine ensemble cast.