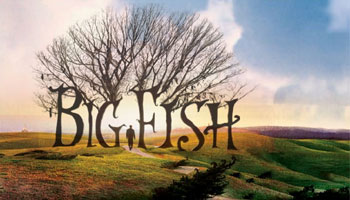 An Adventure As Big As Life Itself.

Synopsis:
In the heart-warming film Big Fish, director Tim Burton (Batman, Edward Scissorhands) brings his inimitable imagination on a journey that delves deep into a fabled relationship between a father and his son.

Edward Bloom (Albert Finney) has always been a teller of tall-tales about his oversized life as a young man (Ewan McGregor), when his wanderlust led him on an unlikely journey from a small-town in Alabama, around the world, and back again. His mythic exploits dart from the delightful to the delirious as he weaves epic tales about giants, blizzards, a witch and conjoined-twin lounge singers.

With his larger-than-life stories, Bloom charms almost everyone he encounters except for his estranged son Will (Billy Crudup). When his mother Sandra (Jessica Lange) tries to reunite them, Will must learn how to separate fact from fiction as he comes to terms with his father's great feats and great failings.


My Verdict:
Big Fish is a big story about a big fish in a small pond. But just how big is big? We all know someone who likes to tell tall tales. Edward Bloom is one of those people. Everyone loves his story-telling. The one person who doesn't is his son, Will. Will is sick of the stories, sick of hearing them over and over and is losing his patience at enduring them. He truly believes they are all figments of his fathers' imagination. It is only when Edward begins to suffer ill health and Will returns to the family home with his pregnant French wife, that Will questions the validity of the stories. Maybe his father has been telling the truth all along? His mother, Sandra, never denounced any of the stories. Surely she would be the one person who knew the truth? Edward even manages to incorporate a big fish into the birth of his only child, Will.

Albert Finney, in possibly his best role ever, is brilliant as Edward Bloom. He is truly gifted at being able to tell a story. Jessica Lange is also brilliant as Sandra. Watch out for a remarkable, moving scene involving Edward and Sandra in the bath - it is a real treat.

Much of the movie is told in flashback as Edward relates tale after tale of his life. Ewan McGregor plays the Young Edward and is more than capable as he unravels the mysteries of Edward's life as he is growing up. Along the way, Edward meets the most amazing characters and has the most amazing experiences. There are some gorgeous cameos involved here - Danny DeVito as a circus ringmaster, Steve Buscemi as a classmate, Helena Bonham Carter as a cat lady with designs on Edward - all if which add to the elements of mystery.

Big Fish is so wonderfully eccentric and a pure delight. Director, Tim Burton, who is renowned for his quirkiness, has created a movie that at times is so unbelievable yet so believable at the same time, if that is at all possible. Only after you have finished seeing the entire movie can you come to that conclusion. So many times during the movie did it all seem implausible yet, upon resolution, it really did all happen. And therein lies the beauty of this absolutely wonderful movie.