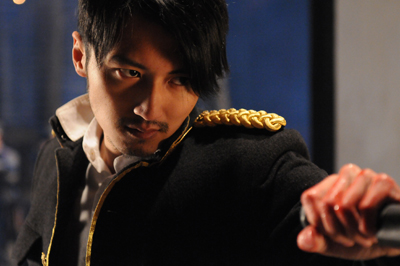 Synopsis: It is the early years of the republic and China has been plunged into chaos as feuding warlords battle to expand their power and their lands. Young army leader Hou Jie and his sworn brother Cao Man find little resistance in their conquer of the township of Dengfeng, leaving thousands injured and dead in their wake.

The venerated Shaolin Temple throws open its doors to the wounded. Disciples Jing Neng, Jing Kong and Jing Hai venture out in the day to save the villagers and at night, become masked Robin Hoods to help the poor and weak.

When Hou Jie learns that temple disciples are helping his enemies, he challenges the temple's kung fu. The abbot purposely loses the fight to Hou Jie and the latter becomes even more arrogant. But Hou is forced to repent when the shock betrayal of Cao Man wipes out his whole family and he is forced to seek refuge at Shaolin. While recuperating at the temple, Hou has the chance to learn Shaolin's powerful martial arts from the crazy monk Wu Dao and find inner peace.

However, his wife Yan Xi has difficulty coping with the loss of their daughter and decides to seek out Cao Man for revenge. In the meantime, Jing Neng, Jing Kong and Jing Hai also have a confrontation with Hou. The encounters anger Cao Man who brings his army to besiege Shaolin and the peace-loving monks are forced to take up arms to protect the refugees and their beloved temple...

"Like many of my peers who were starting out in the film industry in the early 1980s, I was influenced and inspired by the original The Shaolin Temple. I found the martial arts portrayed in this 1982 classic radically different from anything I have seen before. I mean, wow, there was Jet Li executing the most perfect of 360-degree roundhouse kicks in mid-air! It was both stunning and riveting. Don't forget that The Shaolin Temple was made before China opened up to the rest of the world - it was such a rarity.

Because of the enormous success of the original film, many films and television series similarly inspired have been made since. However, I believe our Shaolin is the first feature film officially sanctioned by Abbot Shi Yongxin since the 1982 classic. So when Emperor Motion Pictures challenged me to produce and direct it, it is an offer that I could not proverbially refuse.

One of our first tasks was to come up with something new. Fortunately, Shaolin Temple dates back more than 1,500 years and there are so many tales worth telling. Blessed with such a wealth of materials, we consciously set out not to remake the 1982 Jet Li classic. Instead, we set our Shaolin in China during the 1920s - the age of the warlords.

Of course, martial arts is still the core element of our film. However, we have tried not to replicate what Jet Li accomplished almost 30 years ago. He was too unique. We have to adopt an entirely different approach. On the other hand, and in recognition of the true spirit of Shaolin, we have also avoided indulging ourselves with CGI technologies and special effects. There are several ferocious hand-to-hand battle scenes in our film and one of these will lead to the burning of the temple, a spectacle that painstakingly took us more than a month to shoot.

One thing that impressed me most during our research into the myth of Shaolin was its overriding Buddhist principles of benevolence and forgiveness. Contrary to popular belief, Shaolin Temple does not train people with martial arts so that they could go out and fight each other. Even when pushed to defend themselves, Shaolin disciples still hold on to their somewhat pacifist beliefs. This is ironic but this is also a message that I want to convey in Shaolin.

I have been deeply touched by how people rallied around those affected by natural disasters in recent years. Like those Shaolin monks who offer safe havens to war refugees in our film, they are willing to sacrifice themselves unconditionally for the greater good. To these nameless, noble heroes, I salute you!

I hope audience from all walks of life will enjoy Shaolin as much as I enjoyed making it, and be inspired by it, as much as I was when I saw the original Jet Li classic back in 1982. Thank you. "
-Benny Chan

Recreating the Shaolin Temple
Shaolin Temple is situated at Dengfeng on Mount Song (Song Shan) in the city of Zhengzhou in Henan Province, People's Republic of China. It is largely recognized as the birthplace of Shaolin martial arts, the ancestral courtyard of Zen. It takes its name from the jungles of Shaoshi mountain: Shao plus lin, which means jungle in Chinese. Built in the 19th year of the Taihe years of the Northern Wei dynasty, it gained its formidable reputation in martial arts during the Tang dynasty. It was burned down several times during the feudal era in the run-up to the founding of the republic.

The massive undertaking to replicate Shaolin began in September 2009, involving over 150 worksmen including blacksmiths, carpenters, plasterers, bricklayers and painters. The plan was to reconstruct a life-sized replica of the real temple in Song Shan and the first pile went into the 100,000 square foot lot on October 10. This was the first time in Chinese film history