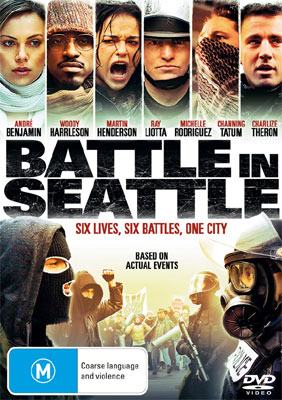 Based on the true events surrounding the 1999 Seattle World Trade Organisation summit, BATTLE IN SEATTLE has been applauded by both critics and filmgoers worldwide for its ability to capture the escalation in tensions between protesters and authorities, and is not to be missed.

What commenced as a peaceful and well organised protest to disrupt the WTO conference of 1999, resulted five days later in the city streets of Seattle resembling a battleground. Almost 10 years later, first time director and screenwriter of BATTLE IN SEATTLE, STUART TOWNSEND brings to vivid life a fictional account that will leave you spellbound.

BATTLE IN SEATTLE follows and brings together a string of characters with different objectives, outlooks and roles as the battle unfolds. We sympathise with protestors Jay (MARTIN HENDERSON), Django (ANDRE BENJAMIN) and Sam (JENNIFER CARPENTER) as they seek a peaceful means to make themselves heard, before the violence takes over.

Meanwhile BATTLE IN SEATTLE follows riot policeman Dale Anderson (WOODY HARRELSON) as he is drawn into the violence along with the differing perspectives of his colleagues, only to discover his pregnant wife (CHARLIZE THERON) is caught in the fray.

As the battle lines between the riot police and protestors are being drawn, Seattle Mayor Jim Tobin, played by RAY LIOTTA, desperately tries to broker a peace.

Emotionally poised and commended for its balance in describing the extraordinary events surrounding this defining incident in modern America, BATTLE IN SEATTLE is full of tension and superb performances.

An unforgettable journey, don't miss your chance to step inside the warzone when BATTLE IN SEATTLE is released to DVD.