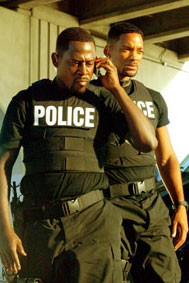 It may have been seven years between films, but Will Smith and Martin Lawrence are back in Michael Bay's cinema shaking sequel to the 1996 buddy cop extravaganza Bad Boys.

For those of you who need some back story, here we go. Mike (Smith) is the cocky 'shoot first and ask questions later' kind of cop luckily only ever found in movies such as these. His partner is the long suffering Marcus (Lawrence), a temperamental family man just trying to survive every passing day with his exuberant Co - worker. As members of the Tactical Narcotics Team in Miami, they chase down the worst drug criminals Florida has to offer while causing as much mayhem as humanly possible.

And that's it. Oh sure, there's a story in this film somewhere, something to do with a Cuban ecstasy dealer and drug trafficking through the use of dead bodies. There's a love interest for Mike in Marcus' hottie D.E.A sister Syd (Union). There are Marcus' plans on retiring, or at least a transfer out of his Bad Boy partnership. And amongst all this there are more explosions, gunfights, car chases and profanities than any film you're likely to see all year.

So why go see Bad Boys 2? Quite simply, for Smith and Lawrence. Their on screen chemistry picks up where it left off nearly a decade ago, and most of the movies best scenes are not the ultra violent shoot outs, but instead the moments when the boys are given the room and five minutes peace and quiet to interact. A mock interrogation by the twosome of Marcus' daughter's first date is priceless.

Having said that, there will be a lot of sore bums on seats during this movie. Clocking in at nearly two and a half hours, with a final thirty minutes amongst some of the sillier ever made, Bad Boys 2 just keeps going. If ever you were thinking of upsizing that popcorn from a large to a jumbo, now is the time.

Movies don't come much louder, much more violent, or in your face than Michael Bay's second Bad Boys instalment. By no means the best action film of the year, but still one worth seeing if you're a fan.