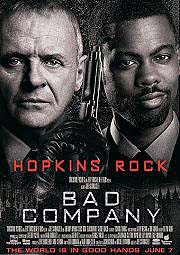 Anthony Hopkins plays a CIA operative who's best undercover agent loses his life just before they are to complete a deal for a stolen nuclear device. So he seeks out his identical twin brother (Chris Rock) to replace him. Comedy ensues as Hopkins struggles with the twin in an attempt to turn him into a super sophisticated agent in just nine days. 'Bad Company' falls flat often in its attempt to go back and forth successfully between comedy and drama. I fear only the most hardcore Chris Rock fans will find this film enjoyable. Some laughs but they are too few and far between.