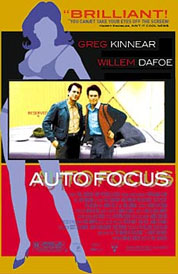 From director Paul Schrader, writer of such films as Taxi Driver (1976), Raging Bull (1980) and more recently, Bringing Out the Dead (1999) comes the film, AutoFocus, detailing the life of actor Bob Crane, star of the popular sixties television series, Hogan's Heroes. Greg Kinnear (Someone Like You, Nurse Betty, The Gift) plays the feature role, demonstrating his diversity as an actor. He is a believable Crane, entering the scene as a struggling radio show host, who when cast as the lead in a successful television show, is thrust into a world a fame he never imagined possible. Meanwhile, Crane meets voyeuristic hi-fi and video technologist John Carpenter or Carpi (Willem Dafoe, in a role far removed from his cackling Green Goblin in last year's blockbuster, Spiderman). The two forge an unusual friendship, Crane drawn to Carpi by his love of photography and Carpenter to Crane by his desire to use Crane's fame to his own advantage. All is well until Carpi introduces Crane to women, and lots of them, showing him how he can trade on his fame for sex. Crane is reluctant at first as the upright family man, who doesn't drink or smoke, but whose first adulterous encounter leads to an addiction to sex. The two begin to live by the adage: "A day without sex is a day wasted." Dafoe and Kinnear share an enjoyable chemistry on screen, as their characters feed off one another emotionally to fill areas in their life that are lacking. Crane needs constant reassurance and encouragement that his career is on the right track and that he still has what it takes to seduce women, while Carpi is really just a lonely individual who craves the excitement and friendship that Crane can provide. But it is Dafoe who steals the show. Carpi's quirkiness and sincerity touch the audience in contrast to Crane's denial over his behaviour and his often self-absorbed approach to life.

It is here that Schrader's second half of the film takes a drastic turn from witty dialogue and colourful imagery to a darker side, as Crane's addiction begins to take a toll on both his professional and personal lives. His marriage falls apart and his career begins to suffer as a result of his tarnished reputation from once moral, righteous family man, to open, unabashed sexaholic. Crane decides he must refocus his attention on his career and realises this means giving up his adulterous ways and anything associated with them, including his friendship with Carpi. It is this long overdue decision, which ultimately, and yet ironically, leads to the sad end of Crane's life. In all, AutoFocus is an in depth film about the realities of sexholism, and in Schrader's own words, like many other of his films, is about "people who want to be one thing but who behave in a way contradictory to that." With an excellent supporting cast including Maria Bello (Coyote Ugly, Duets) as Crane's co-star and second wife Patricia Olsen and Ron Leibman (Just the Ticket) as Crane's long-suffering agent, it bravely and honestly portrays the life of an actor whose fame and friendships led to his addiction to sex and his subsequent downfall from it.