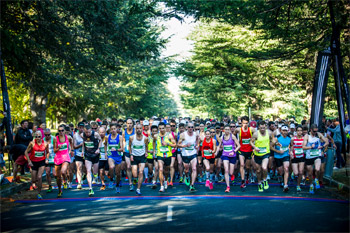 A full weekend of running events are set to take place on 9-10 April as the Australian Running Festival and the iconic The Canberra Times Fun Run return to Canberra.

Join thousands of runners from around the country as serious competitors, joggers, wheelchair athletes, pram pushers and walkers take part in one of the festivals five events.

The Canberra Times Canberra Marathon is the weekend's flagship event, taking place on Sunday 10th April; Australia's oldest marathon will be celebrating its 41st year in 2016.

For serious runners, the Ultra Marathon will once again be recognised by the International Association of Ultra Runner with competitors from the event eligible to be selected to represent Australia at the World Ultra Marathon Championships later in the year.

For those that prefer a shorter distance the 5km and 10km races will both take place on Saturday 9th April.

All five courses will be a one-lap route, exploring the beautiful Canberra lakeside, starting and finishing at the main festival area near Old Parliament House.

No matter what your age or ability, rise to the challenge this autumn as Canberra comes alive for the Australian Running Festival.  Entries are open now for both individuals and teams.