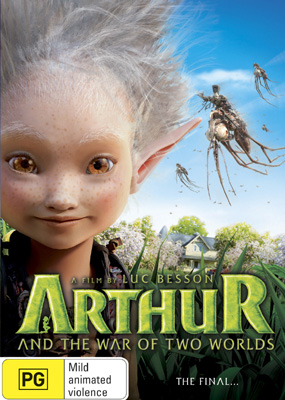 Arthur & The War of Two Worlds

The final movie in the Arthur and The Invisibles trilogy. When Arthur receives a distress call sent from the Minimoys, the invisible people who live in his back garden, he rushes to their aid, ready to fight the evil Emperor Maltazard and save Princess Selenia.

But, what he doesnt know is that the plea for help is all part of Maltazards evil plan to trick Arthur into entering the Minimoys world, reversing the magic that makes him bigger. Now its Arthur that stands at just half an inch tall and Maltazard who is larger than life and running riot in Arthurs world. At his new diminutive proportions, has Arthur got what it takes to defeat the evil Emperor?