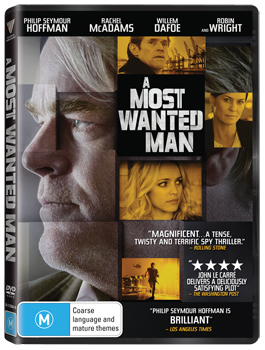 When a half-Chechen, half-Russian, brutally tortured immigrant turns up in Hamburg's Islamic community, laying claim to his father's ill-gotten fortune, both German and US security agencies take a close interest: as the clock ticks down and the stakes rise, the race is on to establish this most wanted man's true identity - oppressed victim or destruction-bent extremist?

Based on John le Carré's novel, A Most Wanted Man is a contemporary, cerebral tale of intrigue, love, rivalry, and politics that prickles with tension right through to its last heart-stopping scene. A Most Wanted Man stars the late Philip Seymour Hoffman (The Master, Capote)) in his final full length feature alongside Rachel McAdams (About Time, Midnight in Paris), William Dafoe (The English Patient, The Aviator), Robin Wright (House of Cards, Forrest Gump), Daniel Brühl (Inglourious Bastards) and Grigoriy Dobrygin (How I Ended This Summer).