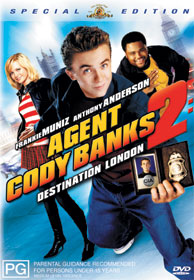 Pass maths, write a history essay and save the world!...It's all in a day's work for junior secret agent when the cool spy action adventure Agent Cody Banks debuts on Special Edition DVD and Special Edition VHS on March 10, 2004.

Starring teen heart-throb Frankie Muniz (Malcolm in the Middle), Hilary Duff (Lizzie McGuire) and Angie Harmon (Law & Order). Combining action, humour, cool gadgetry and exciting special effects, this hip flick follows a junior CIA agent on a secret mission to save the world, stop the bad guys and get the girl...all before curfew.

To his family and friends Cody Banks (Muniz0 is a typical teen, but Cody's got a secret, he's actually part of a secret teen CIA program. Cody's living every boy's dream life, but his training is put to the test when he's sent to pose as a prep school student and befriend fellow teen Natalie Connors (Duff) in order to gain access to her father, a scientist unknowingly developing a fleet of deadly Nanobots for the evil organisation ERIS. From runaway cars and high-speed snowboard chases to a spectacular mountaintop showdown, Cody has to use everything he's learned to prove himself as an agent and stop ERIS.

Review by Patrick Collins (9):
Agent Cody Banks (Freddie Muniz from Malcolm in the Middle) is a junior secret agent working for the CIA on a mission to save the world from the nano-bots, tiny little robots which eat metal.

Cody has some great gadgets to help him beat the bad guys, like a rocket powered snow board and a get-out-trouble, shock watch.

Cody is really cool, I think the most exciting part was when he fights the bullies at the party and rescues a kid from a runaway car using his skateboard. I give it five out of five stars!