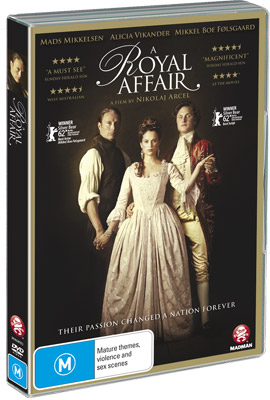 Their Passion Changed A Nation Forever

Winner of the Best Actor and Best Screenplay awards at the Berlin Film Festival, and written and directed by Nikolaj Arcel (co-writer of The Girl With The Dragon Tattoo) A Royal Affair is an epic tale of a passionate and forbidden romance that changed an entire nation. Denmark, 1766, and Caroline Mathilde is married to the mad and politically ineffectual King Christian VII. Ignored by the wild King who chooses to live scandalously, Caroline grows accustomed to a quiet existence in oppressed Copenhagen. When the King returns from a tour of Europe accompanied by Struensee, his new personal physician, Queen Caroline finds an unexpected ally within the kingdom. The attraction between the two is initially one of shared ideals and philosophy, but it soon turns into a passionate and clandestine affair. Committed to the ideals of the Enlightenment that are banned in Denmark, Struensee convinces the King to assert his previously untapped power to remove the conservative political council and implement drastic changes to Danish society. As the Court plot their return to power and the downfall of the Queen and Struensee, the consequences of their affair are made clear and the entire nation will be changed forever.