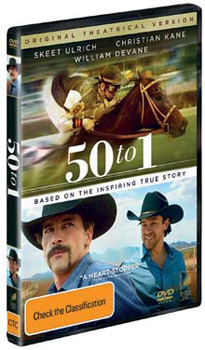 Proving the age-old sentiment -life is no fun if you play it safe', 50 to 1 is the inspirational true story about horse racing. Centered on the two-year old thoroughbred horse -Mine That Bird' and a misfit group of New Mexico cowboys, 50 to 1 is a tale of perseverance and determination.

Crooked footed and exuberant, Mine That Bird was considered hopeless by most. However, in an unlikely turn of events, he becomes the salvation Mark (Christian Kane, Leverage, Just Married) and Leonard (William Devane, Interstellar, The Dark Knight Rises) were praying for. In desperate need of horses to train in an effort to save their struggling business Mark and Leonard, alongside trainer Chip (Skeet Ulrich, Law & Order: LA, Jericho) set out to turn this dark horse into a winner to haunt the doubters. This long shot is their last shot.

As Mine That Bird qualifies for the 2009 Kentucky Derby, the cowboys face a series of mishaps in preparation for the Churchill Downs, becoming the ultimate underdogs in a final showdown with the world's racing elite. With odds embarrassingly low at 50 to 1, their chances are seemingly hopeless. As the pressure is turned up, the cowboys can only pray their hard work doesn't come in last on the world's equestrian stage. The competition is steep, but in a dramatic and heart-pounding race, Mine That Bird takes the Derby by storm. Can he capture the world's attention and defy all the odds in a breath-taking win?

From Oscar® winning director Jim Wilson (Mr Brooks, The Bodyguard), 50 to 1 is the triumphant result of a four-year work in progress. Teaching audiences that misfits are born to stand out, Wilson re-tells this uplifting story with a talented cast, giving cinematic justice to the race that made Mine That Bird, one of the most famous winners in Kentucky Derby history.