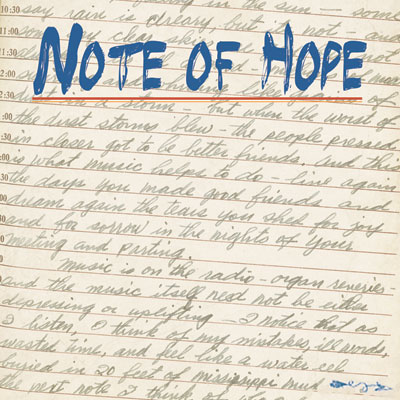 The tracks were penned between 1942 and 1954 while he was living in New York City and Brooklyn. The project was conceived by Nora Guthrie, Woody's daughter, who, inspired by the work of renowned bassist Rob Wasserman asked him to lead the project. Together the two, along with music production company Steep Inc., recruited a stellar group of artists uniquely suited to bringing Guthrie's words alive.

"I always felt that Rob Wasserman's bass is one of the great companions to all words, having worked with so many great wordsmiths over the years," recalls Nora Guthrie. "Each of the artists we invited to collaborate are masterful writers in their own right, with a unique and distinctive voice that stands apart from all others."

The collection kicks off with the evocative Van Dyke Parks' instrumental arrangement "The Note of Hope" and closes with "You Know the Night," contributed by Jackson Browne. The latter, based on a 30-page notebook entry, is an exquisite, epic love song recalling the evening when Woody first met Marjorie Mazia, his second wife. While the album version is just under 15 minutes, a four-minute radio version has also been compiled. Fans can check out the radio version at: www.429records.com

Guthrie always contended that he found his own voice by listening to the men, women and children he crossed paths with and Ani DiFranco's half spoken/half sung "Voice" demonstrates just how valuable these conversations were - not only to his creative process, but to his understanding of life. His tales of working class characters ring as true today as when they were written. In Lou Reed's "The Debt Owe," a man wanders around Coney Island, unsettled by the realization that his karmic debt outweighs even his financial liabilities while Madeleine Peyroux's sultry "Wild Card in the Hole" warns that "Times are getting hard, folks/they might get harder still/no matter who wins office in that big house on the hill."

The legendary singer-songwriter Pete Seeger, who became a close friend of Guthrie's after meeting him at a 1940 benefit concert for migrant workers, and Tony Trischka - named "the godfather of what's sometimes called new acoustic music" by The New York Times - contribute the transcendent "There's a Feeling in the Music." Michael Franti captures Guthrie's earthy sensuality in the percolating "Union Love Juice" while Tom Morello yearns for an equally progressive woman in "Ease My Revolutionary Mind." Kurt Elling's funky, inspired performance of Guthrie's "Peace Pin Boogie" is a tongue-in-cheek look at the rewards of being politically correct. Chris Whitley examines the jagged edges of a relationship in the breathtaking talking blues number "On The High Lonesome," recorded shortly before his death.

Other highlights include Nellie McKay's "Old Folks," a meditation on aging and "I Heard A Man Talking," wherein the late Pulitzer Prize winning author Studs Terkel recounts an exchange between a petty thief and a barfly over music that might have been heard in a Beat-era coffee house.

Woody Guthrie, born on July 14th, 1912 in Okemah, Oklahoma. He wrote over 3,000 songs in his lifetime, including "This Land Is Your Land," which became America's unofficial national anthem, and such standards as "Pretty Boy Floyd," "Pastures of Plenty," "Going Down The Road," and many more.