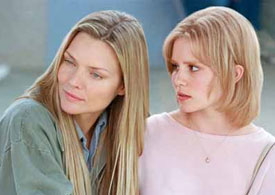 Where does a mother end and a daughter begin?

Synopsis:
White Oleander tells the unforgettable story of Astrid, a girl whose odyssey through a series of Los Angeles foster homes - each its own universe with its own laws, its own dangers, its own hard lessons to be learned - becomes a redeeming journey of self-discovery. Based on the acclaimed best-selling novel by Janet Fitch, White Oleander follows a young woman's journey through hardship and loss to maturity, joy and true independence. After her uncompromising but seductive mother Ingrid (MICHELLE PFEIFFER) kills her boyfriend for abandoning her, fifteen-year-old Astrid (ALISON LOHMAN) witnesses her mother's arrest. It's an event that will change the course of both their lives. Suddenly, young Astrid is on her own. Shuttled through a series of foster homes (and foster mothers including ROBIN WRIGHT PENN and RENÉE ZELLWEGER), Astrid struggles to master the techniques she needs if she's to survive the unyielding and often harsh world she is thrust into. Astrid tries desperately to forge her own identity within her ever-changing environment. From behind bars, Ingrid's powerful influence is the only constant in Astrid's life. For good, and for bad... In the three years that mark her passage from child to adult, Astrid must learn the value of independence and courage, rage and forgiveness, love and survival, to earn her freedom from the past.


My Verdict:
White Oleander is essentially a film about relationships, more specifically the relationships that Astrid encounters while she is in her late teens. Alison Lohman is Astrid and has most of the screen time. There are not too many scenes where she isn't featured and it is a credit to her to be able to show us a range of personality as her life changes according to her living arrangements. She tries so hard to be the person her mother has consistently told her she is, but she comes to doubt that as she is placed in different foster homes. Each new foster home brings with it a whole new perspective on life for Astrid and she struggles to adapt because of the indoctrination of her mothers belief's. (Note to the filmmakers : Astrid's wigs are too obvious).
Michelle Pfeiffer is Astrid's mother - Ingrid Magnusson - and she does a sterling job in her role. Sometimes she can be so cruel with the truth with just a look. She is hiding her true self behind a façade of strength and resolve and constantly tells herself and Astrid that it is them against the world. Eventually she lets us in on her secret life that she has denied for so long. Michelle really is the outstanding actor in this movie.
Robin Wright Penn plays one of Astrid's foster mothers, Starr. She is a born-again Christian after a life as a stripper and alcoholic and has created a perfect picture of a woman who really doesn't know who she is. She is so campy in her outfits and so right for the role.Renee Zellweger is another of Astrid's foster mothers,Claire. She is a struggling actress in Hollywood who is so insecure in her working life and in her marriage. She plays the tragic role with conviction and it's hard not to feel sorry for her because she is trying so hard to get her life right.
Oprah Winfrey selected the book, White Oleander, written by Janet Fitch, as her May 1999 selection for her book club, and this sent sales soaring. White oleander is a beautiful flower that protects itself by making its own poison - an analogy to Ingrid's perception of her life.
White Oleander is a moving movie and is one step above being a run-of-the-mill chick flick.