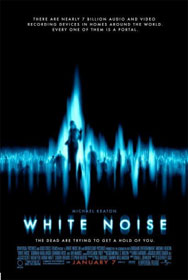 The Dead Are Trying To Get A Hold Of You

Synopsis:
Until the sudden and mysterious death of his beloved wife, architect Jonathan Rivers (Michael Keaton) considered himself a decent, rational man, one who would not ordinarily subscribe to any theories about communicating with the dead. But now, a stranger, Raymond Price (Ian McNeice), has entered his life, claiming to have heard Jonathan's wife, Anna (Chandra West), through EVP.

Then, the unthinkable-Jonathan himself capture Anna's voice and image through recordings he has made; she has established direct contact and has a message for Jonathan - to save the future victims of the brutal psychopath who took her life.

E.V.P. - Electronic Voice Phenomenon - is the process by which the dead, through sound and image, communicate with the living through the static and white noise of modern electronic devices.

My Verdict:
Happy couple, architect Jonathan Rivers and his second wife, successful author Anna, have just discovered that they are pregnant and they are ecstatic. Anna fails to return home from a night out and even after her abandoned car is found there is no trace of her. As days pass, the chances of Anna being found alive grow slimmer, with Jonathan becoming more and more miserable without her and without knowing what her fate was. One day, Jonathan notices a man watching him, almost stalking him. He confronts the man who tries to convince Jonathan that Anna has made contact with him and needs to speak to him. Yeah right, thinks Jonathan. But curiosity gets the better of him and he fronts up to Raymond Prices' home, to discover that Raymond has devoted his life to recording messages from the dead via white noise - the recording of sound in a silent room.

Jonathan is soon convinced after hearing Anna via one of Raymond's recordings, creating an emotional turmoil for Jonathan, who decides to try to contact Anna himself, almost to the point of becoming obsessional about making contact. Jonathan sets up a mini-recording studio in his home, neglecting his young son along the way, in order to speak with Anna. But what he hears is not always loving and gentle, as Anna tries to convey her anguish over her death and tries to warn Jonathan of the imminent death of others from her killer.

It is good to see Michael Keaton in another straight role and he plays the role of the desperate Jonathan well. Ian McNeice is an atypical actor taking on the obsessed paranormal investigator and covers his role well. Additional support cast are also more than adequate, including that of Deborah Kara Unger who plays Sarah Tate, a woman who contacts her fiancée through EVP and who befriends Jonathan.

There are a few gory moments in 'White Noise' as well as plenty of suspenseful, tension riddled moments, including a hectic final scene. Whether you believe that contact can be made with the dead is not crucial but it does raise this interesting possibility, so being prepared with an open mind may be helpful.

'White Noise' is better than your average horror/thriller because it takes an intriguing slant on the genre, delving into a little known area where the living makes contact with the dead via EVP - electronic voice phenomenon, which makes a welcome change from the average slasher type horror movie.