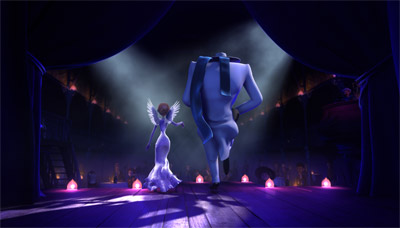 Synopsis: A delightful 3D movie set in Paris in the year 1910, and featuring music by Sean Lennon.

Raoul is a delivery man by day and scientist by night. With the help of his friend Emile, a shy cinema projectionist, Raoul attempts an experiment that has an unexpected side effect - a tiny flea caught in the line of fire suddenly becomes a seven foot tall 'monster'. The enormous flea soon breaks loose and begins to wreak havoc on Paris.

Before Raoul and Emile can catch-up with it, Lucille, a pretty nightclub performer, crosses paths with it and makes an extraordinary discovery. The 'monster' is not only gentle and friendly, but also a gifted guitar player and performer. Together, they join forces to save the remarkable creature from the city's ruthlessly ambitious police chief.

Question: How did Bibo present the project to you?

Vanessa Paradis: Actually, it was Matthieu Chedid who first mentioned it, a few years ago. He had been contacted to write the music and lyrics for the film's songs. I didn't meet Bibo right away-we just talked on the phone at first. He told me the story of the movie and explained the context: Paris in the 1900s, the flood, the cabarets... I'd really enjoyed his earlier movies and I read the script as soon as it arrived.


Question: So you were involved very early in the process?

Vanessa Paradis: Yes. It's the first time that, as an actress, I've come in on an animated movie so early in the creative process. On A Monster in Paris, I followed everything right from the very first graphics that are supposed to capture your facial expressions and movements. We started by recording the songs in studio with Matthieu. Bibo has a very good ear for music and he was delighted with Matthieu's work. Then, we got to work on the speaking voice of Lucille, the female character he had created from scratch.

Question: Could you describe Lucille to us?

Vanessa Paradis: Lucille is someone who tries to do the right thing without upsetting anyone while remaining her own woman. She's both constrained and independent. She runs a cabaret, which involves a lot of responsibility and pressure and she has quite a bossy aunt who likes to be obeyed and wants Lucille to be a goody-two-shoes. But Lucille still manages to do pretty much as she pleases. Above all, she loves being on stage. When she's up there singing, it's as if she were escaping the routine and restrictions of her daily life. Which could explain why Bibo drew her stage costume with wings...


Question: From time to time, do you also have to adopt this goody-two-shoes attitude that is demanded of her?

Vanessa Paradis: We all, including me, have to make efforts and compromises to live in harmony with each other, but my situation is not at all the same as Lucille's. And Lucille is not such a goody-two-shoes: she is generous and sensitive and thinks with her heart first and foremost. That's why she's the first person to see beyond appearances and glimpse the magnificent soul that Francoeur possesses beneath his outer monstrosity. She helps and protects him when the police are on his heels, but the monster also gives her so much. When they are on stage together, she takes wing.


Question: In the movie, you speak and sing both in French and English. How did the recording of the voices go? Did you work in both languages simultaneously?

Vanessa Paradis: In 2005, we started by recording the music and songs in French. For the spoken text, we also started with the French version, before moving onto the English version. It was only much later that we recorded the songs in English.


Question: Does it feel different? Did you find different inflections in English and French?

Vanessa Paradis: The musicality of the two languages isn't the same, the emphasis is different, but the sense that you give to a line comes from the words and so it remains identical.


Question: How did you "find" Lucille's voice? Did the images help you build your character?

Vanessa Paradis: When we started work on the movie in 2005, there was just the script without images or anything. So, the creation of the character came from the voice and her motivations. From that point on, voice and image constantly informed each other, with the voice taking the image in one direction, then the images forcing us to be more precise in our interpretation and understanding of motivations, and so on. The whole piece developed out of this dialogue. The film grew out of nothing like a cathedral. It was really interesting.

Working with Bibo was fascinating. In animation, your performance can be much more over the top than in a regular movie, especially as speaking lines without being filmed removes a lot of pressure. You're not thinking about hitting your marks and where the camera is. Animation relies more on instinct, and Bibo gave us a lot of freedom. He drew us into a playful, fun environment, exaggerated but never ridiculously so. He is very precise and always manages to capture the pitch and subtlety you associate with non-animated movies.


Question: Just like Lucille, you have sung in cabarets. Do you still enjoy that?

Vanessa Paradis: It's what I enjoy most. I have been lucky enough to perform in all kinds of venues, and cabaret and theater is what I like most. I like old things-wood, sculptures, velvet-and you find all that in a cabaret. They are venues on a human scale where the audience often forms a circle around you. You feel the whole space wrapping you up. And cabarets have a soul. So much goes on there-what you experience on stage and what happens backstage, in the dressing room and wings. I like to picture the people who have been there before me-the showgirls and their costumes. It gives me a bigger thrill than any modern, steel venue ever can. 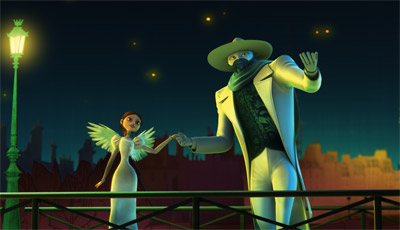 Question: Who were your heroes when you were little?

Vanessa Paradis: My heroes were, and still are, Gene Kelly and Fred Astaire. I admire their talent as dancers, their charisma and stagecraft. They were so overwhelming, they could make me cry tears of joy and emotion. They inspired me to do what I do now. Then there was Marilyn Monroe, for the woman she was-her voice, attitude, body, strength and vulnerability, and her intelligence.


Question: Did any monsters scare you? In cartoons, movies or books?

Vanessa Paradis: The monster I found most scary when I was little was the invisible monster that followed you down the hallway at night when you came out of your room. As if by chance, he was always behind you. He's not particularly impressive, with no face or body-an invisible force in the dark. Apparently, it's very common for young children to be scared by that.