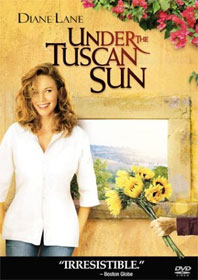 By Paul Fischer in Los Angeles.

Diane Lane admits that she can relate only too well to what her latest character endures throughout her latest movie, Under the Tuscan Sun. A still ravishing 38, the Oscar nominated star plays a 35-year-old San Francisco writer whose perfect life has just taken an unexpected detour. Her recent divorce has left her with terminal writer's block and extremely depressed, and her best friend, Patti Sandra Oh}, is beginning to think she might never recover. When Patti buys her a ticket to Tuscany, Frances instinctively decides to buy a villa in the beautiful Tuscan countryside. There, she decides to begin anew, restoring her new home, where she eventually finds the fulfillment she was searching for, including love, family and friendship. Lane, herself a divorcee from French actor Christopher Lambert, says she immediately identified with Frances' emotional rollercoaster. "I felt when I read the script that there were no tricks I had to learn or elements that she possessed that I didn't know anything about," Lane explains, chatting in a Los Angeles hotel room. "I could say that I had experienced everything that SHE had experienced and then some, so, it was simple for me to understand her emotionally and to play her." Lane even concedes that she "was very eager to purge myself of all those feelings that I had and have a place to put them."

Lane says it was a relief to finally be purged of those pent up feelings shooting the film, "especially within the boundaries of humor, within the context of having a sense of humor about oneself unwittingly, which, after all, is the fun of being in a movie." Not so much fun was being away from her latest love, Josh Brolin, despite being on location in gorgeous Tuscany. "I got no sympathy when I would get homesick because everyone says you're in Tuscany, whereas if you were in Chernobyl they would feel sorry for you", she says laughingly. But I was so homesick; three months is a long time, and I had just gotten my daughter started into fourth grade, I was very in love and I hated leaving home, and I felt sick like a very guilty mother that I'm in the most romantic place in the world, and away from everybody. It was torture." Still, she was able to bring some of that angst into her acting. "I looked tired because I was. Method, okay? I was up all night, with phones, emails that very slow in the hotel with the Internet connection. Then by the time I'd get off the computer, my daughter would be home from school so I figured well I'd call her, and then after that I'd just be up to 2:00 every night."

Contrasting the experience of Tuscan Sun to her previous role in the intense Unfaithful, she at least gets to make out with yet another dishy European actor, this time in the guise of Italy's Raoul Bova. "Well, we always have to have that," she says laughingly. She says it's part of her contract. "Forget the back-end shot; I just want romance."

Off screen, she married Josh Brolin and says that in some strange way, the new relationship has made her more of a romantic. "I think monogamy is where it's at and it's a hell of a lot better than celibacy, which is my other option, so I am very content."

As happy as she is in her personal life, her career isn't too shabby either. A true Hollywood survivor, Lane has been a part of the Hollywood scene for some quarter of a century. Yet, a few years shy of forty, Lane is able to get sexy, rich characters to play and she has to think about why that is. "I just think it is pure luck and I feel very grateful to be working, period, because statistically speaking, I'm an anomaly in my union and my demographic. I don't get it but I'll take it. I mean, and I'll run with it. I don't know why me." The icing on her cake was her Oscar nomination for last year's Unfaithful, and as grateful as she was for the recognition, the whole lead up to the Oscars was not what she expected. "It's like you're drafted. I came home from Italy filming this to a campaign and I just said, what is that? I have no idea." She was in Tuscany when the news of her nomination was announced and the actress admits that "I was mortified and terribly embarrassed, because I didn't know what was involved. You end up the studio's entry in the race, out there in these dresses. Meryl Streep 18 times or something like that doing that? I can't imagine because I wouldn't wish it on anyone. It is exhausting, it creates its own momentum, and it is a whole other animal from doing your job. Even the fine print in the contract promoting a film is enough."

Lane admits she doesn't accept compliments easily, and is happy trying to balance her career with motherhood and a new marriage, a balancing act that she admits is hard "but no more so than any other working mom. I mean, other working moms have it harder in a sense that they can't say well, you know what, I'm not going to work for three months, but in some ways, I don't know if they are going to have a mandatory, retirement placed upon them either, so it's sort of a switch. I've got to make the most of "make hay while the sun shines" as they say and at the same time my daughter needs me and if I want to increase the size of the family I've got about six minutes left, so all these things are all happening simultaneously, no pressure or anything." She hopes to try and fit in another child to her already demanding schedule.

Diane Lane has had quite the career, having starred in over 40 films. So one wonders, now that her daughter is 10, knowing what she does, would she encourage her daughter to act? "Knowing what I know? Absolutely. She can do whatever she puts her mind to as far as I'm concerned, I want to support her 100 percent."....

UNDER THE TUSCAN SUN opens early next year.